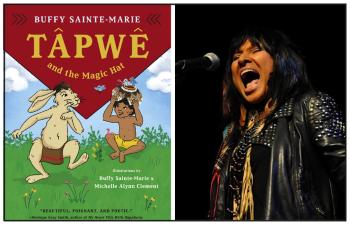 Singer/songwriter and author Buffy Sainte-Marie with cover of her new children's book Tâpwê and the Magic Hat.

“Although I make up a lot of stories, I find it real easy to think in short attention spans. I'm used to having the start, the middle, and the end all happen in three minutes and still make a point.” — Buffy Sainte-Marie
By Adam Laskaris
Local Journalism Initiative Reporter
Windspeaker.com

Though most would recognize Buffy Sainte-Marie for her extensive body of work in the music industry, the world-renowned singer-songwriter is also forging an impressive career as a children’s author.

Sainte-Marie’s latest work comes in the way of a children’s chapter book called Tâpwê and the Magic Hat, which hit shelves this past June.

Inspired by oral histories and traditions, Sainte-Marie’s second book follows character Tâpwê as he goes through adventures after receiving a magical hat from his kokhom (grandmother).

“I know for sure I'm a songwriter,” Sainte-Marie said in an interview with Windspeaker.com.

“Although I make up a lot of stories, I find it real easy to think in short attention spans. I'm used to having the start, the middle, and the end all happen in three minutes and still make a point. [Songwriting and children’s books) are both a lot of fun. At least so long as you don't confuse them with work.”

Tâpwê is available in both English and Cree text versions, with Sainte-Marie also narrating an English audiobook.

Sainte-Marie said she’s hoping to have the Cree version recorded as well. Both versions contain an English-to-Cree glossary in the back pages of the book, which she credits scholar First Nations University professor Solomon Ratt for carrying out the translation.

“Some of my nieces and nephews who wish they were taught Cree want to use it as kind of a [textbook],” Sainte-Marie said. “They can try and learn at least one paragraph. They're gonna start at one, the first paragraph, and see if they can learn some Cree.”

Sainte-Marie also said she appreciated the opportunity to have the plot of a story naturally develop within her mind while writing the book.

“What a luxury it is to be able to let a character go on and on, see what she/he has to say,” Sainte-Marie said. “It's really fun to pretend. I'm using the character's imagination. See what appears.”

“I had never worked with an editor,” she said. “An editor with a long project like a book kind of helps you to stay on the path and points out where the story's going to get lost. So it was a learning experience for me for sure.”

Sainte-Marie’s publisher, Greystone Books, connected her with Michelle Alynn Clement who provided many of the books’ illustrations.

“We've never even met in person,” Sainte-Marie said of her illustrator. “My first talks with Greystone were before the pandemic, and I was going to do the illustrations for Tâpwê myself. Already had several done. But we were talking about, I think, 30 illustrations, including some colour plates. I had concert commitments for the next three years. Didn't have time to make all those pictures, so we started looking around for a co-artist who could re-interpret my drawings, somewhat ghost my style, and come up with additional illustrations.”

The partnership was a natural fit.

“I liked Michelle's style right away,” Sainte-Marie said. “I wish we could have worked together in real time, but we did everything by email and data downloads.”

Sainte-Marie had previously written Hey Little Rockabye – A Lullaby for Pet Adoption for Greystone, while Still This Love Goes On is set to be released next month on September 27.

Beginning her career in the early 1960s, Sainte-Marie has long been a champion for Indigenous inclusion across the arts.

“In 1968 I insisted on all the Indigenous roles be played by Indigenous actors on TV's The Virginian or I wouldn't be in it. I got my way and Hollywood added 37 Indigenous people to their casting lists. That's not something you just stick your neck out for nothing,” she said. “If you're gonna tell a Hollywood movie producer and director team that they ought to hire Indigenous people, you better be able to provide them or you're just spinning your wheels.”

A winner of several major awards — an Academy Award, a Golden Globe, and the Order of Canada—and a star on Canada’s Walk of Fame, Sainte-Marie said she still considers it important to stress the need for Indigenous representation in the arts.

“We do have qualified Indigenous people in the arts, in every walk of life, but it's a matter of wanting to support one another.”

Following the premiere, Carry It On will be released theatrically in the fall of 2022, followed by broadcasts via Bell Media and APTN in Canada and in November 2022 on PBS/American Masters in the U.S.