Children's book provides a chance to connect with the changing seasons 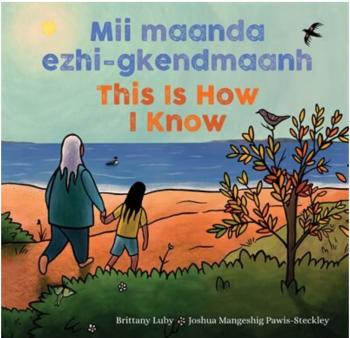 “I think an important part of the story is encouraging people to reconnect with their plant and animal teachers. Who’s giving you signs that the season might be changing?” —Dr. Brittany Luby
By Adam Laskaris
Local Journalism Initiative Reporter
Windspeaker.com

In her second children’s book, titled Mii maanda ezhi-gkendmaanh / This Is How I Know, Dr. Brittany Luby explores the wonders of the four seasons, telling the story of which animals, plants and changes in the natural surroundings are connected to each season.

“When an orange star shows bedtime is near, and brown Peeper sings, ‘Goodnight, little one.’ This is how I know spring,” a passage from the book reads.

Aimed at younger readers but a pleasant read for anyone, the book is a short journey through how one can recognize when seasons start to show signs of change, and the different connections people can have with the environments they live in and interact with.

“I like to imagine sharing these stories with my nieces and my nephews when I’m writing them,” Luby said.

“I think that you can feel so loved when you are outdoors and take that moment to connect with the trees that are creating air that’s better for you to breathe. You can become attuned to how all our plant and animal relations are just giving so much of themselves so that we are living the most fulfilling life that we can.”

Luby (Anishinaabe-kwe) said the book was a way for her to reflect on her upbringing.

“I miss my ancestral territory when I’m away from it. This book was a way for me to reconnect that was really nourishing for me,” Luby said. “I think an important part of the story is encouraging people to reconnect with their plant and animal teachers. Who’s giving you signs that the season might be changing?”

Outside of her work in children’s books, which includes her 2020 debut picture book Encounter, Luby’s research as an assistant professor of History at the University of Guelph consists of a wide range of topics related to Indigenous health, education, as well as the industrialization of the Canadian boreal forests and subarctic. She was inspired to do this work by being brought along to negotiation meetings as a teenager by her father.

"My Dad was on Council for six terms and chief for two terms. Dad is an active member of Niisaachewan Anishinaabe Nation to this day. He has acted as a chair of general band meetings, lead negotiator, and project manager.

“I witnessed Dad at work in each of these roles. However, I began to watch how he worked as a negotiator. The meetings I remember most clearly focused on the damages sustained by Niisaachewan Anishinaabe Nation as a result of hydroelectric development."

“This sparked my passion for learning about my ancestral community, water issues, and the impacts of the settler-colonialism on the territory,” Luby added.

Alan, who works as an assistant professor at York University, said he and his father did the majority of the translation over the course of a weekend working together. Though he’s been studying the Anishinaabe language for more than 20 years, Alan does not consider himself fully fluent and enlists the help of his father to help with some of the tougher translations.

“There’s distinctions to be made about trying to get literal and yet be true to the author’s words and sentiment,” Alan said. “I looked at this project as a challenge to try to further my understanding of the language in a different way.”

Originally travelling to British Columbia for only a short visit with his sister in 2015, Pawis-Steckley said he ended up enjoying himself so much — and the milder climate —  that he’s now been there for almost six years.

His first sample for the book was done in September 2019. Pawis-Steckley said he completed the illustrations over the course of six months or so, concluding in summer 2020.

Outside of his work with children’s books, his art career has included a residency at Skwachay's Lodge in downtown Vancouver, a featured doodle on Google’s home page in July 2019 highlighting the traditional Ojibwe Jingle Dress dance from the early 20th century, and operating a new screen printing shop.

When he’s not creating art, Pawis-Steckley enjoys swimming, which he said helped while creating artwork for the book.

“A lot of the inspiration came from just being out on the lake with my family, swimming all day,” he said. “It’s a mix of Woodlands art and traditional children’s picture book style.”

Mii maanda ezhi-gkendmaanh / This Is How I Know is available here, as well as through most major bookstores.