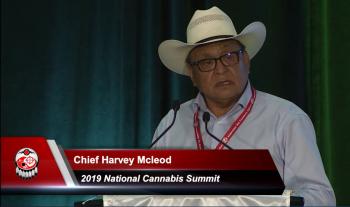 “We’re very fortunate in British Columbia, because we have a willing provincial government that wants to work with us… That’s not the case for the rest of this country.” —Wes Sam, co-hair, BC AFN working group on cannabis
By Deb Steel
Windspeaker.com Writer

From justice challenges to jurisdiction issues to health concerns, the discussions about cannabis and the involvement of First Nations in the cannabis industry fall along a wide spectrum.

And it’s all been coming at leadership fast since Canada set out to legalize pot use and make the growing and distribution of non-medical cannabis an economic opportunity.

“It’s been a scramble-ly, crazy, awakening awareness about where we’re at,” said Chief Harvey McLeod of the Upper Nicola Band. He was speaking at the Assembly of First Nations’ first ever Cannabis Summit Sept. 4 as a representative of the BC AFN’s working group on cannabis. It has been in operation for about one year.

And the perspectives to be heard also span a spectrum, from the grandmothers and mothers who are concerned about the impacts, who have seen and dealt with the ravages of drug-use in their children and grandchildren, to the energy and urgency of First Nations entrepreneurs hoping to find space within the quickly developing market.

“The task at times may seem impossible,” said McLeod. “But at times like this it seems like that’s when we come together to ensure that our voice is heard and our thought is heard… and we lay a good path, not only for us here today, but for the ones that are following us.”

Each of the hundreds of First Nations across the country may have different priorities and be facing different challenges when it comes to cannabis, especially depending on the political regimes currently in the different provinces.

“We’re very fortunate in British Columbia, because we have a willing provincial government that wants to work with us… That’s not the case for the rest of this country,” said working group co-chair Wes Sam.

There is a chaotic approach to the industry in some territories, like in the case of distribution sites that are just “simply set up.”

“I’ve heard stories that a small trailer came into the community and started distributing cannabis without any acknowledgement of the government of chief and council… so these are some of the challenges that First Nation communities are experiencing,” said Sam.

The chiefs at the AFN summit are sharing their experiences, challenges and solutions, from the quality and safety of products (especially from “grey market” dealers) to the development of a “red brand”, from harm reduction for opioid addiction and mental wellness to traditional and culture use and ceremony, and from the nation-to-nation relationship with the Crown through full engagement in legislation and policy to revenue distribution.

And the revenues are substantial, in the hundreds of millions of dollars in each province.

“It’s a big game,” said Sam. “This industry is predicted to produce $8 billion in Canada, and internationally it’s into the tens of billions. So, First Nations definitely want to be involved.”

These dollars can be used as the base for First Nations to move on with other projects, said Sam.

The first day at the summit provided an update on the legislative changes on cannabis, legal and political arguments related to First Nations jurisdiction over cannabis and self-governing authority regarding the cultivation, processing and sale of cannabis outside of the federally-regulated regime, plus licensing, regulating and taxation in regards to cannabis.

Today, the chiefs will hear about the medical benefits and potential harms from cannabis use or misuse, and about the experiences of those First Nations that have already taken the plunge and involved themselves in the cannabis industry.