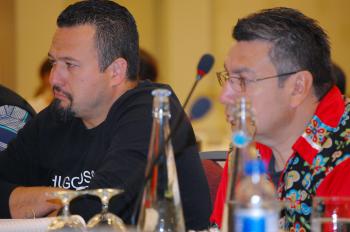 "It’s as if governments, whether provincial or federal, don’t care our Aboriginal or Indigenous youth are dying right now. That’s the way it seems to us in our community." —Chief Billy-Joe Laboucan
By Shari Narine
Windspeaker.com Contributor

As Alberta chiefs implored the RCMP to help more in their war against drugs on their reserves, “K” Division Commanding Officer Deputy Commissioner Curtis Zablocki said that battling drugs was more than a law enforcement issue.

“Policing itself is not the answer in our communities, but policing combined with work with family services, work with health, working with our community services and our community individuals, that is the answer,” Zablocki told chiefs on June 12. It was the second day of a two-day Assembly of Treaty Chiefs gathering held in Edmonton to talk about health.

He said the RCMP was working to build trust and relationships within the communities. However, chiefs were firm in their belief that the RCMP was not doing enough to stem the flow of drugs, specifically crystal methamphetamine and opioids.

"There is a drug epidemic," said Chief Isaac Laboucan-Avirom of the Woodland Cree First Nation.

Their frustration was strongly underscored when one chief requested free tasers, and another chief admonished his fire department for putting sprinklers on the roof of an alleged drug house, saying he would rather see it burn to the ground if a nearby wildfire breached his community.

Zablocki was kept for an hour—well beyond his scheduled time—responding to concerns. The obvious interest expressed by chiefs prompted Treaty 6 Grand Chief Wilton Littlechild to suggest that the assembly hold a meeting in the future focused solely on justice issues.

Band council resolutions were held up as an example of how First Nations were trying to take control on their reserves by evicting suspected drug dealers, but were receiving no support from the RCMP in enforcing BCRs.

O’Chiese First Nation called out the RCMP for accepting BCRs for Community Tripartite Agreements, which allow for enhanced police service, but then saying BCRs were unenforceable when it came to banning drug dealers from the reserve.

“Our people are crying for help and when we as leaders look to the RCMP for that help, it’s not there,” said O'Chiese First Nation, Proxy Chief Councilor Barry Saulteaux.

Zablocki admitted the RCMP has their “hands tied” when it comes to enforcing BCRs, but he didn’t offer any details as to why.

Chiefs also talked about the length of time it took for the RCMP to respond to issues on the reserve and that there weren’t enough police officers to provide adequate service.

To help address the lack of policing, Whitefish Lake Chief Albert Thunder said his First Nation is paying $162,000 annually through the Enhanced Policing program for access to a dedicated RCMP officer for 40 hours a week.

“(That money) comes out of our program dollars. So it takes away from a program so then we’re adding on to the poverty and grief again (when) we’re trying to deter the drugs and alcohol and violence and gangs and all the stuff that is starting to happen within our community,” he said.

While Zablocki acknowledged that having to reallocate program funding for more policing was not ideal, he said the RCMP had no say as they were only the service provider in a program administered by the provincial and federal governments.

Yellowknee also said courts should be harder on drug dealers and not use Gladue reports when sentencing. Gladue reports are a tool used by the courts that take into consideration the background and historical issues for Indigenous offenders.

Laboucan-Avirom suggested that drug dealers be charged for murder or manslaughter for deaths due to overdoses. A handful of opioid dealers have faced charges for manslaughter in Canada.

However, Zablocki said it was difficult to charge drug dealers—whether of meth or opioids—with manslaughter as “all the stars have to align.”

Chiefs pointed out that methamphetamine was starting to overtake opioids as the major drug concern on reserves.

Lubicon Lake Band Chief Billy-Joe Laboucan said that his northern community of about 600 had experienced six deaths due to crystal meth in the past couple of years.

“Every time that happens, we’re devastated. We are in crisis,” he said.