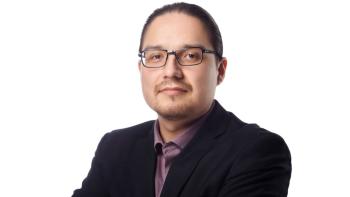 “It's round two… Now it's getting down into the details of ‘let's get a shovel in the ground’ and that is going to take a lot more engineering, technical capacity, community engagements, internally and externally from First Nations. (It’s) another year planning roughly.” — Enoch Cree Nation Chief Billy Morin
By Shari Narine
Local Journalism Initiative Reporter
Windspeaker.com

Getting the nod to further develop two separate carbon capture project proposals in Alberta is not too much for the First Nation Capital Investment Partnership (FNCIP), which comprises the First Nations of Enoch Cree, Paul, Alexander and Alexis Nakota Sioux.

“We can take on more, if anything,” said Enoch Cree Nation Chief Billy Morin. “They’re two completely different, separate applications and we’re lucky we got them both in round one, which we were kind of happily surprised.”

At the end of March, the Alberta government announced six potential projects had been selected in the first round of submissions to look at safely storing carbon from industrial emissions in hubs deep underground.

FNCIP is involved in the Open Access Wabamun Carbon Hub west of Edmonton and the Wolf Midstream project east of Edmonton.

“We do have to walk with some humility and say we do need partners like Enbridge. We do need emitters like Capital Power, which has already signed up with Enbridge and Lehigh (Hanson Materials Limited). We need those industry partners for their expertise, but also to come to the table in a fair and equitable way, and that’s what Enbridge has done,” said Morin.

FNCIP and Lac St. Anne Métis have 50 per cent ownership in the Wabamun project.

The Wolf Midstream sequestration hub will serve large facilities in the industrial heartland of Fort Saskatchewan. Initial hub volumes are expected to be between two to three million tonnes per annum with significant expansion capability to support current and future requirements of area businesses. If given the go-ahead, it is expected to be operational by the end of 2024.

Engaging First Nations as these projects get underway is an indication that the province has learned from its mistakes with oil and gas development, said Morin.

“In one way, shape or form I would say they got ahead of the game this time and learned from some of their historic mistakes in not engaging with us developing oil and gas over the last 80 years,” he said.

“This one is a brand-new industry and from the start we’re at the table, having ownership … (and) upholding treaty rights below the depth of the plow…So the government was really proactive … and I'm really happy they did that.”

Companies will be invited to work with government to further evaluate the suitability of each location. If the evaluation demonstrates that the proposed projects can provide permanent storage, companies can work with the government on an agreement that provides them with the right to inject captured carbon dioxide. This agreement will also ensure they will provide open access to all emitters and affordable use of the hub, reads a statement from Alberta Energy.

“It's round two, so we're talking about more regulatory development with the provincial government,” said Morin. “Now it's getting down into the details of ‘let's get a shovel in the ground’ and that is going to take a lot more engineering, technical capacity, community engagements, internally and externally from First Nations. (It’s) another year planning roughly.”

Morin said he sees FNCIP engaging with the Alberta Indigenous Opportunities Corporation once they have “structured a deal” with the province.

“It's not the only way we can raise capital, but certainly in Alberta that was exactly what this was designed for. (It) is to engage First Nations in new initiatives with industry in the province itself. Absolutely, we will be at the table with them early,” he said.

The AIOC, created in 2019, was initially set up to provide loan guarantees to natural resource projects. This past February, the mandate expanded to include investments in major agriculture, telecommunications and transportation projects. The AIOC can provide up to $1 billion in loan guarantees. To date, it has backstopped more than $160 million in Indigenous investments in natural resource projects, according to Alberta Indigenous Relations.

Alberta has committed $1.24 billion through 2025 to two commercial-scale carbon capture and storage projects. Both projects will help reduce the carbon dioxide emissions from the oil sands and fertilizer sectors and reduce greenhouse gas emissions by 2.76 million tonnes each year. This is equivalent to the yearly emissions of 600,000 vehicles.

A second request for full project proposals to provide carbon storage services to regions across the rest of the province just closed.