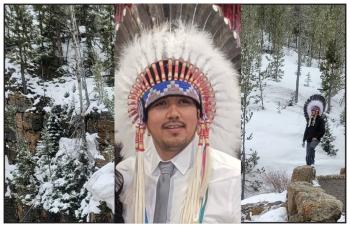 Chief’s grandfather Albert Eashappie “stopped the pipelines one kilometre off the reserve. He asked them not to come through his community because there would never be any proper consultation if an emergency response were to ever happen.” — Chief Scott Eashappie
By Shari Narine
Local Journalism Initiative Reporter
Windspeaker.com

The 14,000-barrel spill of crude oil from the Keystone pipeline into a creek in Kansas last week has Carry The Kettle Cega'kin Nakoda First Nation (Cega'kin) “gravely concerned” about TC Energy Corporation’s operations on its nation 80 km east of Regina, Sask.

Cega'kin is the only First Nation in Canada with seven high pressure pipelines running through the community, says Cega'kin Chief Scott Eashappie, six of which are operated by TC Energy or an affiliate.

TC Energy confirms it has “several operational pipelines that traverse the main Assiniboine #76 reserve” of Cega'kin.

Among those pipelines is the Keystone pipeline, which was built 60 years ago.

“The safety of this (pipeline) business running through everybody’s backdoor needs to be a priority. And (TC Energy) need to improve on their safety regulations to ensure that this does not happen underneath someone’s home, someone’s backyard. I’m really thankful that in Kansas, as far as I know, no one has been hurt,” said Eashappie.

On Dec. 7, the massive spill along a portion of the Keystone pipeline forced TC Energy to shut down the system. The 14,000 barrels that spilled into the creek in Washington County, Kan., marked the worse leak suffered by the Canadian-owned TC Energy in the company’s history.

Eashappie says with what happened in Kansas, he wants to see “enhanced pipeline safety measures, standards and remedial actions” taken with TC Energy’s pipelines on the Cega'kin to reduce any “unacceptable risk factors.”

There have been no disaster-type events with any of the pipelines on Cega'kin to date, he says, but that doesn’t mean community members haven’t noticed impacts.

Over the years the layout of the ground has changed as the pipelines throw off heat, melt the snow, keeping the area moist and causing depressions. As well, says Eashappie, a couple leaks are suspected with the ground contaminated where nothing will grow any longer. There’s also a filmy substance along a watering hole near a pipeline.

In 2016, TC Energy (then TransCanada Corporation) signed an agreement with Cega'kin that, in part, included communications and consulting provisions with the community.

Since being elected as chief this past April and previous to that serving on council, Eashappie has made addressing that relationship with TC Energy his priority.

There’s personal history there, he points out.

When the first pipelines went through the community in 1949, Eashappie’s grandfather Albert Eashappie was chief.

“He stopped the pipelines one kilometre off the reserve. He asked them not to come through his community because there would never be any proper consultation if an emergency response were to ever happen. He did not want those lines coming through his community,” said Eashappie.

But the lines came through and Albert Eashappie resigned.

At that time, Indian Oil and Gas Canada, an agency within Indigenous Services Canada, managed and regulated oil and gas resources on the nation.

Since 2018, says Eashappie, Cega'kin has taken steps towards sovereignty, exercising its rights through traditional laws and protecting its treaties and inherent rights.

“Anything below the depth of a plow we should be consulted on. (So in) the next 50 years I don’t have my grandchildren challenging what I should be doing today. So (there needs to be) better consultation through industry, Canada, the province in respecting our treaty and inherent rights when it comes to developing an economic growth for our communities,” he said.

“We consider the Nation one of our most significant relationships,” TC Energy told Windspeaker.com in an email statement. “We are working closely with (Cega'kin) to understand their priorities and working with them on a number of initiatives that help bring better awareness for safety measures.”

Eashappie expects the evacuation plan to be finalized by mid-June 2023. Towards that end, he says, the nation’s budget will include contingency funding to cover the costs of moving members out of the community and lodging them in hotels.

“Nothing matters more to us than safety and we take a multi-layered approach – with a focus first on prevention,” stated TC Energy.

“I have a direct line (to TC Energy) and they answer my call within two rings,” he said.

“I have a legacy to carry forward from my grandfather, to be protecting our community whatever it takes,” said Eashappie, who is 34 years old.

TC Energy stated it will be conducting a “full investigation into the root cause of this incident in Kansas.”

On Wednesday TC Energy restarted a section of the main trunk of its Keystone pipeline from Hardisty, Alta. to the U.S. Midwest, as well as a branch extending eastward to Illinois.

The 4,324-km pipeline helps to move Canadian and U.S. crude oil to markets around North America.

“We are committed to operating our systems safely and to continuing our meaningful and respectful dialogue with the Nation and all Indigenous groups affected by our projects and operations,” said TC Energy in its email statement.