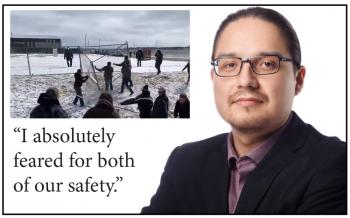 “We have online threats of white supremacy against our Nation now and we had a member threatened in the city of Edmonton for this incident.” — Enoch Cree Nation Chief Billy Morin.
By Shari Narine
Windspeaker.com Contributor

There will not be a repeat of yesterday’s mass gathering of Grace Life Church protestors trespassing on Enoch Cree Nation. Checkpoints that will be manned 24/7 have been erected and will be in place for two weeks and the need to do that angers Enoch Cree Nation Chief Billy Morin.

“My grandma phoned me at 11 o’clock last night. It sucks when I have to reassure her—she’s 81— (that) she’s safe because we have checkpoints out there. When did that become normal? I hope it doesn’t,” Morin said.

Grace Life Church, located along Highway 627 just south of Enoch territory, was the scene April 11 of hundreds of people protesting, among other things, the closure of the church building. Last Wednesday, a chain-link barricade was erected around the building closing it off to congregants. The protesters tore parts of the fence down.

For months the pastor and congregation have blatantly defied Alberta Public Health safety measures to limit capacity to fight the spread of the coronavirus.

Morin says he was aware through social media that a protest would be occurring at the church on Sunday. He wasn’t expecting it to spill over onto his Nation’s land nor, specifically, to see 50 to 75 vehicles parked on his grandmother’s property.

At 10 a.m. yesterday he said “curiosity” caused him to drive to his grandmother’s place and that’s when he saw the massive amount of vehicles parked there. A short conversation with her indicated that she did not want the vehicles on her property. The Enoch Council had also said there would be no trespassing on the Nation. Morin points out that there is a no trespassing sign on the road, as well as signs that mark the roads as on Enoch Cree Nation.

“I parked my car to block off access to the Nation. We got into some verbal altercations with some of the protestors,” said Morin.

For about 10 to 15 minutes, he says he, his grandmother and one RCMP officer, who Morin managed to flag down as the officer was patrolling Highway 627 near Grace Life, held off protestors until more Enoch members arrived.

“There were people in my face saying racial things. I myself got pretty heated. I absolutely feared for both of our safety,” said Morin, whose vehicle was kicked and mud thrown inside of it.

No one was arrested for that incident, but it was some six hours Enoch was dealing with the tresspassers, and  later in the day a verbal altercation with an Enoch councillor did result in the arrest of one protestor, said Morin.

Morin says he’s not surprised at the racism he faced.

“I think it’s a sad reflection of where things are at in Canada now, in Alberta, unfortunately,” he said.

The verbal attacks lasted well beyond the incident and the site.

“We have online threats of white supremacy against our Nation now and we had a member threatened in the city of Edmonton for this incident. She had nothing to do with it, had no knowledge of it other than seeing it on social media and the news. It’s concerning,” said Morin.

“This is just like disrespecting and racism and people who are out not to support necessary spiritual rights, but to cause disturbances in society and that’s not something we stand for,” he added.

People’s Party of Canada leader Maxime Bernier is scheduled to hold a press conference Monday at Grace Life Church, a part of his western tour to bring about an end to all COVID restrictions.

Grace Life Church released a statement Sunday saying that while it “appreciates the public outpouring of support to fully open churches in Alberta,” its congregants were not part of the protest.

“Grace Life Church recognizes the place for peaceful protest within the context of democracy,” said the statement.

Morin says he has never personally met any Grace Life congregants. He said that some of the protestors on Enoch Nation land left peacefully once they were told they were trespassing.

However, of the others, Morin said, “What was really ignorant of the situation, after making this clear to them, it was them trying to impose that we should be following them…. After making it clear to them, they were still belligerent.”

The protestors did not wear masks and Morin says he took that “as a personal attack” on his grandmother’s health, as well as for the Elders who lived down the driveways protestors tried to access.

Morin says he “certainly understands the frustration” of Grace Life Church congregants who can’t worship at their church and the hardship being experienced by business owners because of lockdowns and restrictions. After all, River Cree Casino has had to close down and the restaurant has now set up an outdoor patio.

“I guess, it’s a little … ironic, though, that we’re seeing First Nations really step up and being leaders in this area. We were accused in the past, I would say, of not following rules and being radicals in society, but I think at this time it’s more reflective on non-First Nations … lack of leadership in this area and not showing care and concern for the collective, of all Treaty peoples, all Canadians, all Albertans,” said Morin.

A statement released Monday by the Confederacy of Treaty 6 Nations condemned the acts of racism, trespass, vandalism and violence on the Enoch Cree Nation land and called them “illegal, unacceptable and a clear violation of the Nation's right to community safety.”

Grand Chief Vernon Watchmaker said he was “deeply concerned by the reckless acts of violence that diminishes the relationship with settler representatives.”

Morin says he is in constant contact with the RCMP detachment located on the Enoch Cree Nation about the checkpoints.