Change requires the ability to dream with the courage to act, says Margo Greenwood 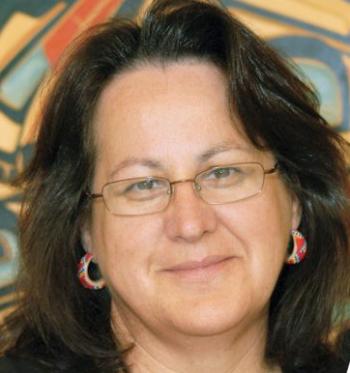 Dr. Margo Greenwood is a newly-appointed Officer of the Order of Canada.

“I see where we are beginning to come to terms with different cultures, and different systems of knowledge, and how we are going to live in peace and harmony.” — Dr. Margo Greenwood
By Odette Auger
Local Journalism Initiative Reporter
Windspeaker.com

Programs and services that are meant to serve young members need to take into account the uniqueness of being an Indigenous person, said Dr. Margo Greenwood.

She is a newly-appointed Officer of the Order of Canada, the country’s highest recognition, which honours her life’s work of transforming the health of Indigenous children, families and communities.

Greenwood is an Indigenous scholar of Cree ancestry. She is the Academic Leader of the National Collaborating Centre for Indigenous Health, which is housed at the University of Northern British Columbia. She is also a professor in the First Nations Studies and Education programs at UNBC, and has contributed to Canadian Institutes of Health Research, Institute of Aboriginal Peoples’ Health, and is currently a member of the Institute of Population and Public Health Advisory Board.

Greenwood was at her desk working from home when the phone call came in from the Office of the Order of Canada to “inform me of some good news,” Greenwood said.

“I was absolutely speechless and didn’t know what to say other than ‘thank you’.”

“I always believe If one of us succeeds, we all succeed,” she told Windspeaker.com.

“I don’t carry this award alone. I carry this for all the people who believed in me, who supported me, who walked the journey with me. I carry this for my granddaughter, for my sons, so they can see this contribution to their family. When I think about it, it’s not about Margo Greenwood. It’s about so much more than that. It’s for all those people, and it’s for all of us.”

Greenwood has written 135 publications focusing on Indigenous peoples' health and well-being. She co-authored General Comment #11 Indigenous Children and their Rights under the United Nations Convention on the Rights of the Child.

“And be able to envision what change could be, and how we can change our lives and support others in that kind of change.”

One of Greenwood’s most important work was for UNICEF Canada with the groundbreaking “Leaving No Child Behind” (2009). In it she explains the importance of looking at all of the factors that impact Indigenous children and families lives.

“It brought an awareness and recognition to Indigenous children and families’ realities.”

There remains a need to look at how the day-to-day lived experiences of Indigenous people impacts individual health, but also the health of communities as a whole, Greenwood said. “And that’s important when we are thinking of change.”

There are many sad stories that come from Indigenous realities, she said.

One of the systemic pieces Greenwood helped forge is an assessment tool to ensure existing and new policies include First Nations, Inuit and Métis peoples’ perspectives and realities. It was created with Northern Health in BC and introduced nationally this year.

The difficult circumstances that Indigenous peoples face means there’s still a lot of work yet to be done, though good steps forward have been taken.

“With respect to early childhood, I think there’s been a growing recognition of the uniqueness of Indigenous early childhood education programs and services.”

Progress is seen in the Indigenous early learning and childcare policy framework that focuses on self-determination and distinctions-based care.

“That’s one of the tools that’s come into being in the last few years that supports that notion of the distinct early childhood,” Greenwood said.

Greenwood emphasizes the need for a conversation around racism, and particularly anti-Indigenous racism. It’s essential because it plays out across all sectors, she said.

“A decade ago, or even a few years ago, you would not be hearing that word [racism] in certain meetings. I see now it is a much more common conversation, a more common consideration. Do I think we have a long way to go? Absolutely, in that work. And, I think that it needs to cover all disciplines and sectors,” said Greenwood.

She said it’s a matter of retaining the ability to dream, and having the courage to act.

“I see where we are beginning to come to terms with different cultures, and different systems of knowledge, and how we are going to live in peace and harmony.”

Greenwood’s path has had its share of challenges. She was orphaned at the age of 16. She “credits calling on the power of vision to open doors and overcome challenges in her journey,” reads a press release announcing her appointment to the Office of the Order of Canada.

“As a child spending time outside on the land, I learned how to dream. And dreaming is hope,” she said.

Greenwood has been a single mother most of her life, and “being a mother, being a woman is really hard when you are also really committed to a career or to learning; just to go to university and organize childcare for your children so you can go.”

It’s a life of working late at night or early in the morning to do your assignments when the children are asleep, she said.

It was a tremendous amount of work, said Greenwood. Looking back, “I have had so much support throughout my life, it almost seemed like they were just gifts in my life who came just at the right time. People who I learned from over the years.”

“It also takes courage. Courage to try,” she says. “I didn’t know what university was going to be like. But I knew it would be important to myself and my family, and so I did it. None of these journeys are easy, and you make personal sacrifices to be able to do it.”

Greenwood has learned the lesson of listening. It’s an important gift, the gift of listening, she said. “It’s for us to learn, but it’s also for us to be that place where people are heard.”

She shares a teaching she received from knowledge keepers.

“I really believe… we come with a gift, or gifts.

“Our responsibility, our job is to realize that gift in our lifetime. There’s much for us to learn, so we can share that gift for the collective good.”

“I listen and watch our young people because as they’re realizing this gift, they also bestow it on us around them,” Greenwood said.

“I lived my life trying to realize my gifts and contribute in some way to the collective good. And remember until I die and go to another place, I will always be learning. To know that I’m always learning is to be humble, and I think that is a really important value.”