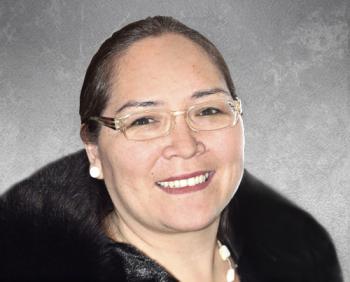 “We will continue to advocate to push the envelope, to always strive for more protections and more support and more recognition for Inuktut language rights.” — Aluki Kotierk
By Shari Narine
Local Journalism Initiative Reporter
Windspeaker.com

Aluki Kotierk is looking beyond the Indigenous Languages Act in her fight to have Inuktut become the language of essential public services in Nunavut.

The president of Nunavut Tunngavik Inc. is also targeting the Official Languages Act, which the federal government is in the process of revisiting. That act was adopted in 1969 and since then, says Kotierk, the political landscape has changed to include the creation of the Nunavut territory in 1999.

Kotierk says fighting for Inuktut on a second front was made necessary by the narrow parameters set by the Indigenous Languages Act.

When the bill was introduced in February 2019, Inuit Tapiriit Kanatami (ITK) said the legislation did not address Inuit rights to speak their language nor did it address issues around accessing public services, like health care, education and justice, in Indigenous languages. That did not change by the time the bill was passed in June 2019.

Kotierk, who represents NTI as one of four land claim area directors on ITK, says the Indigenous language legislation was developed without consulting the Inuit.

Kotierk draws a connection between residential schools, education and official language use in Nunavut. She says it is “quite mind-blowing” that the federal government apologized for its public assimilation policies through Indian residential schools, yet English, not Inuktut, is used in Nunavut schooling. And the curriculum is not based on Inuit culture.

“So to me. I’m like, ‘How have things changed?’ I guess we’re not being shipped out of our communities, but the reality is in every public interaction that we have in our communities, the vast majority of it is in English,” she said.

“Anyone who comes to Nunavut should see that Inuktut is thriving. Unfortunately, our language rights are not afforded the same protection and support (or) the resources to flourish such as other languages, such as English and French.”

As part of the Inuit-Crown Partnership Committee of an Inuktut working group, NTI continues its battle with the Indigenous Languages Act.

“We will continue to advocate to push the envelope, to always strive for more protections and more support and more recognition for Inuktut language rights,” said Kotierk.

Kotierk says ITK has put forward a name for the minister of Canadian Heritage to consider as part of the selection committee for the Indigenous languages commissioner. She says her understanding is the commissioner will have three directors, one for each Indigenous group.

As for the funding mechanism, Kotierk is adamant that funding should not be meted out on a per project basis as “we would not expect that of the francophone community.”

Instead, she wants funding delivered in a way that meets standards.

“When you go into a government public office you will have Inuktut speaking individuals to provide the service to you. To me it should be on standards of what people can expect,” said Kotierk.

The logistics of setting up that virtual consultation is ongoing. Kotierk says the ministry has been told that information needs to be available in Inuktut. There are also practical concerns with virtual engagement, she adds, including broadband and infrastructure inequities. No date has been set as to when that consultation will begin.

“There are many different venues in which we can continue to advocate for Inuit language rights,” said Kotierk, who is also wanting to be heard through Official Languages Act engagement sessions.

In March 2019, the federal government announced it would hold consultations to “modernize” the act and “discuss key issues that might affect the scope of official languages, and to explore ways to ensure the long-term survival of official-language minority communities.”

“I think we’re at the point where we have the resources and the passion to be able to do it at all tables. And I think part of the reasons for that is that, for me, part of the way in which public policy will change is if more Canadians become aware of the inequities faced by the Inuktut-speaking Canadians because the public services are not available in Inuktut,” she said.

If there’s any doubt what wider-public pressure can accomplish, the decision by the Edmonton Football Team this past June to drop its “Eskimos” moniker is proof enough. It’s also a reason why Kotierk believes in patience.

“As Inuit we often take the long view. We don’t expect anything to change overnight but it’s important that we continue to be consistent in what we’re saying and what we expect,” she said.

“I would also say we have big bold audacious dreams and certainty that we will at one point get to the point where Inuktut is the language that we’re served in everywhere we go (in Nunavut). And I really do believe that will occur.”