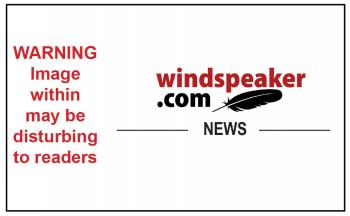 “This is such a desecration of an animal in our culture (that) means a lot to our people. Bear is seen as a protector and a healer. It is the chief of the four-legged.” — Kukpi7 Wayne Christian
By Shari Narine
Local Journalism Initiative Reporter
Windspeaker.com

Kukpi7 Wayne Christian cannot understand how anyone can treat bears this way.

On May 23, upwards of 100 skinned and clawless bear paws, including bear cub paws, were found by Brandi Hansen, who was hiking with her family in the Scotch Creek area, the traditional territory of Secwépemc people. Most of the paws were located in a culvert, although some had been dragged by wildlife to the road.

“I just don’t know… if you have any understanding of creation and all aspects of it, everything has a spirit,” said Christian, Tribal Chair of the Shuswap Nation Tribal Council.

Christian was greatly disturbed by what happened and is concerned it may happen again.

In a move to prevent a re-occurrence, the public has been made aware of what has happened and the Neskonlith Band and the Pespesellkwe te Secwepemc are offering a reward of $3,000 for any information resulting in a conviction. The reward is $1,000 more than the maximum $2,000 reward offered by the BC Wildlife Federation.

To date, Dave Nordquist, director of natural resources for the Adams Lake Indian Band, says there has been no response to the reward.

David Karn with BC Environment confirmed the ongoing investigation by the conservation officers and said it was not a joint effort with the RCMP.

In an email response to Windspeaker.com, Karn said there was no information to share at this point.

Black bear hunting is limited to two animals per adult hunter and requires a fish and wildlife ID. Hunters also need a basic hunting license and a bear license and must be a resident of British Columbia.

Disposal of carcasses or wildlife parts falls under the BC Wildlife Act, which bans the dumping of animal parts and carcasses where there are “likely to be people, in a manner in which the attractant could attract dangerous wildlife, to the land or premises, and be accessible to dangerous wildlife.”

“This is such a desecration of an animal in our culture (that) means a lot to our people. Bear is seen as a protector and a healer. It is the chief of the four-legged. For us that blatant display of the paws thrown out like that and discarded…I honestly can’t imagine what they were thinking or what they were doing,” said Christian.

A ceremony was held to honour the bears on May 31.

“The spirit of those bears, this is like any living thing that passes on in such a way. Their spirits are restless. They need to be put to rest. What we did (Monday) was to call them where we were doing the ceremony and let them know we could help them go back home because we don’t know where they came from. So that was a big part of it. How do we help our brother because they’re a really important part of who we are to find their way home to where they need to go,” said Christian.

If a bear’s spirit can’t find its way home then “it will roam and it will interfere with the living,” he added. And if that happens, “they will let us know and our spiritual leaders will be able to guide them and help them.”