Centre shut down by protesters who duck out as police gather 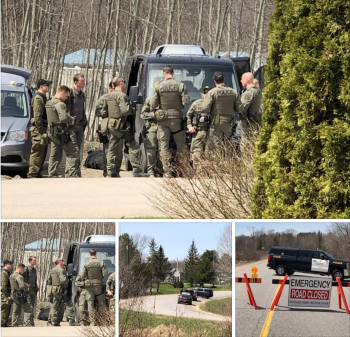 OPP rolled out its tactical team. And demonstrator Dave Stock took photos of the OPP’s presence.

Almost 12 hours after 14 demonstrators walked out of the Wahta Cultural Centre on Wahta Mohawk First Nation they had their first phone conversation with the Ontario Provincial Police. The demonstrators, however, did not tell OPP they were no longer at the centre.

The protesters were at the centre for a couple hours to raise allegations of corruption against the band council. OPP soon responded to reports the occupiers of the centre were armed.

“We sat around for about two hours and then all of a sudden we got a call (from a community member) saying we had fire arms and that there were 12 men in there with guns,” said Brittney Pegahmagabow, who with husband Dave Stock, led the group of men and women into the centre.

“We were like shocked. We didn’t have no firearms. We didn’t harm anybody.” Pegahmagabow said the OPP wouldn’t tell them who claimed the group was armed. However, she believes it was one of the band councillors, who came to the cultural centre where a minor altercation took place.

“We taped up all of the windows and then we walked out the back door at 11:30 a.m. and walked home,” said Pegahmagabow. “We could have got shot. We could have got hurt by one false accusation.”

The OPP was only in the front of the building at that point.

Pegahmagabow says they were worried about their safety and that was why they left. However, as they wanted to continue their protest, when OPP finally contacted them by phone at 11 p.m. last night, they pretended they were still in the building.

Stock said they had every right to be concerned for their safety as Bracebridge OPP rolled out its tactical team. He took photos of the OPP’s presence. OPP also closed Muskoka Road 38 near Bala.

Pegahmagabow said she figures the OPP realized the cultural centre was no longer being occupied around 1:30 a.m. this morning when Muskoka Road 38 was re-opened. She says she doesn’t know if they stormed the building to discover it empty.

Calls by Windspeaker.com to two OPP detachments and the communications operator resulted in no information from OPP.

“Yesterday morning we decided it was time to take a stand to voice our opinions and this is the only way to get it out there,” said Pegahmagabow.

She said they got their direction from the Elders that same morning to do their protest at the cultural centre.

When she and her group entered the centre, they gave the employees the opportunity to join the demonstration or leave.

“They shook our hands. They said, ‘Okay, we know what you’re doing and we’ll leave.’ So they did,” she said.

Pegahmagabow says the group was protesting a corrupt council “that buys votes,” targets band members when they protest what council is doing, and has created an “enemies list.”

“My husband is being targeted by the council because he’s too loud.  He voices his opinion and voices it about what’s going on and they don’t like it,” she said.

“The general consensus (is) it’s okay for people to pick on somebody, (but) when the victim stands up and basically strikes back or starts standing up for himself, then the other person plays the victim. That’s what’s happening here,” said Stock.

Wahta Mohawks Chief Phillip Franks did not respond to a request from Windspeaker.com for an interview.