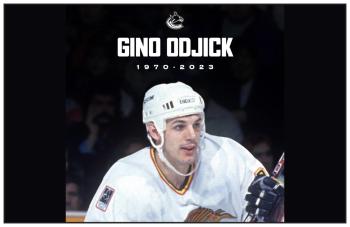 One of the most popular Indigenous players that made it to the National Hockey League has died.

Gino Odjick, who was an Algonquin from Kitigan Zibi Anishinabeg First Nation in Quebec, died on Jan. 15. He was 52.

“Our hearts are broken. My brother Gino Odjick has left us for the spirit world ❤️❤️,” she wrote.

Odjick played a total of 649 NHL games and earned 142 points, including 68 goals.  The left winger, however, was primarily known for being an enforcer during his 12-season NHL career.

He racked up a total of 2,709 penalty minutes while playing in the NHL. He had a career high 371 penalty minutes in 70 games during the 1996-97 season while toiling with the Vancouver Canucks.

Odjick was primarily known for his time with the Canucks as he spent eight seasons with the British Columbia-based franchise. He also had stints with the New York Islanders, Philadelphia Flyers and Montreal Canadiens.

The Canucks posted a statement about Odjick’s death on social media on Sunday.

“Gino was a fan favourite from the moment he joined the organization, putting his heart and soul into every shift on and off the ice,” said Francesco Aquilini, (Canucks’) chairman and governor. “He inspired many and embodied what it meant to be a Canuck. Personally, he was a close friend and confidant, someone I could lean on for advice and support. He will be deeply missed.”

After retiring from the NHL in 2002, Odjick concentrated on being an Indigenous role model. He staged various workshops throughout B.C. on issues which included goal setting, relationship building, communication skills while promoting anti-bullying characteristics.

Many, including Odjick himself, believed he was near death almost a decade ago. During the summer of 2014 he announced he had a rare blood disorder and that it was terminal.

It was believed that Odjick had mere months to live at the time. But he was given new life following experimental new treatment.

“Everything is in remission now,” Odjick had told Windspeaker.com in an October 2021 interview, after it was announced he would be inducted into the BC Sports Hall of Fame.

At the time Odjick added he would need to continue taking medication for his disorder for the rest of his life.

Odjick was understandably thrilled when news broke that he would be inducted into the BC hall of fame.

“What an honour for me and my family,” he said at the time. “Being in the hall of fame is a forever thing.”

Canucks’ vice-president of operations Stan Smyl, one of Odjick’s former teammates, spoke glowingly of him following news of his death on Sunday.

“He was a very special individual,” Smyl said, adding Odjick always fulfilled his tough-guy role on the ice. “Off the ice he was one of the most kindest human beings that I’ve met and played with. The role he was as a player is one of the hardest roles to play in hockey. And he handled it very well. It’s a role that you as a player know when you have to be the tough guy and support your teammates and he was always there for that.”

Smyl added Odjick had a knack of knowing when to fire his teammates up.

“He also knew that if things weren’t going right on the ice, or the team wasn’t play quite up to their calibre, that he could go out and stir it up and get the players excited, get them involved in the game,” he said. “I guess the best way of saying it is he could bring the team into a fight just by being Gino.”

Smyl recalled that he was on the same line as Odjick for his first NHL game. Odjick made his presence known right away, engaging in two fights that night against members of the Chicago Blackhawks.

But when it came time to greet team supporters, Odjick, who was listed as 6-foot-3 and 216 pounds during his playing days, displayed a much gentler side.

“He was very kind and passionate and always made time for the fans off the ice,” Smyl said.

Smyl added Odjick was well-liked by his teammates. And not just because he was always sticking up for them on the ice.

“He was one of the most funniest guys off the ice,” he said. “He was always joking and being light in the dressing room. And that’s important to have. If there were some pressure situations, Gino knew when to be able to make everyone laugh.”