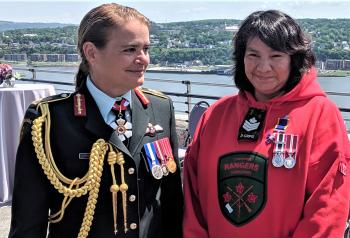 “She’s dedicated to the Rangers, to her family, and to her community.” — Warrant Officer Daniel Stortz, an army instructor
Submitted by Peter Moon, public affairs ranger
3rd Canadian Ranger Patrol Group at Canadian Forces Base Borden

One person stood out among all of the 35 men and women of the Canadian Armed Forces who were bestowed honours at an Order of Military Merit investiture ceremony at the historic Citadelle of Quebec.

She stood out because she was wearing her distinctive Ranger red hoodie when she was called forward to receive her insignia as a member of the Order of Military Merit from Governor General Julie Payette. She was the only Ranger among the 35 recipients of the national honour.

“I was nervous,” said Kamenawatamin. “I was nervous waiting for my name to be called. But it was exciting. She congratulated me. I’ve got my medal.”

The Order of Military Merit was founded in 1972 and recognizes conspicuous merit and exceptional service displayed by the men and women of the Canadian Armed Forces. It is the military equivalent of the civilian Order of Canada.

Kamenawatamin is the first female Ranger in Ontario to receive the rare honour. Four male Rangers in Ontario have been awarded it in the past. The Rangers are part-time army reservists.

She has been a Ranger for 11 years and received her nomination from Warrant Officer Daniel Stortz, an army instructor.

“She’s dedicated to the Rangers, to her family, and to her community,” he said. “She does it all.”

Master Corporal Kamenawatamin has already been awarded the Special Service Medal and Queen’s Diamond Jubilee Medal for her military service.

Her full-time job is with a company bringing hydro to her isolated community of 500 people. She is the mother of four sons and one daughter, who range in age from 11 to 25.

She was accompanied by her youngest son, Dominic, 11, who joined her in meeting the governor general at a reception after the investiture ceremony.

The Citadelle is one of two official residences of the governor general. It is located within an historic military installation overlooking the St Lawrence River. The other residence is Rideau Hall in Ottawa.