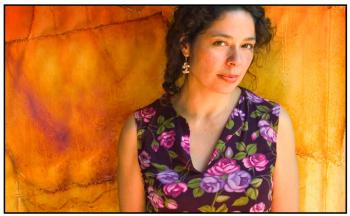 “I'm really interested in how we see the world as Indigenous peoples. We grow up sometimes in an environment that doesn't always include our lens or our metaphysics or our point of view or our stories." —Sandra Laronde
By David Owen Rama
Windspeaker.com Contributor

For the past two decades, as the founder and artistic director of Toronto-based Red Sky Performance, Laronde has built a cultural organization around a mission to inspire experiences of contemporary Indigenous arts and culture created and produced with the intention of transforming society.

“I work towards really trying to maintain and keep within that Indigenous aesthetic,” explained Laronde over the phone from Toronto.

“What I admire about our culture is that we didn't try to silo everything. We didn't put dance over here and storytelling over there and music over there, but it was always combined,” Laronde explained.

“It was always very interdisciplinary, was always part of everything. And that's why I think within the art world of Canada some of these disciplines are running a little bit out of breath, because they siloed them out and kept them there, when in fact all these art forms sort of feed each other.”

To celebrate its 20th anniversary, this month Red Sky Performance, with the backing of a new initiative called Digidance, will unveil a new documentary about the company called More Than Dance, We Are A Movement.

The production is a 60-minute film incorporating interviews with members of the RSP team and features substantial portions of two recent performance pieces by the company, Trace and Miigis.

Choreographed by award-winning performer Jera Wolfe, the recipient of one 2019 Dora Mavor Moore Award, Trace is a kinetic dance experience inspired by Anishinaabe ancestral stories exploring the origins of the universe.

“I'm really interested in how we see the world as Indigenous peoples,” says Laronde. “We grow up sometimes in an environment that doesn't always include our lens or our metaphysics or our point of view or our stories. So, it occurs to me that essential stories are held in the star world.”

Also included in the documentary will be portions of the Red Sky production of Miigis, a performance inspired by the “power of nature and Indigenous prophesy.” Miigis originally premiered in September 2017 at the Fort York Historic Site in Toronto, and then went on to celebrate its European premiere the following year at the Venice Biennale in Italy.

The title of the piece is a reference to the miigis shell, which in Anishinaabe culture represents the “perfect breath of life.” Through the amalgamation of contemporary Indigenous dance and athleticism Miigis tells the origin story of the Anishinaabek people and their journey from the Atlantic coast to the Great Lakes.

Founded in July 2020 as a response to COVID-19 restrictions, Digidance is a joint initiative between four leading Canadian dance presenters, DanceHouse (Vancouver), Harbourfront Centre (Toronto), the National Arts Centre (Ottawa), and Danse Danse (Montreal), which joined forces with a mandate “to deliver exceptional, full length Canadian and international dance content online to patrons across the country.”

It’s Laronde’s multidisciplinary approach to incorporating dance, music, theatre, art, storytelling, and a variety of media that has made Red Sky a leading presenter of contemporary Indigenous performance across Canada and globally.

The name of the company is derived from Laronde’s traditional name Misko Kizhigoo Migizii Kwe, which means “Red Sky Eagle Woman” in the Anishinaabemowin (Ojibway) language from the Teme-Augama Anishinaabe (People of the Deep Water).

According to Laronde, the opportunity to produce More Than Dance, We Are A Movement “came up pretty fast.” But due to the company’s multidisciplinary approach to its productions she felt they had archived enough solid video footage of past performances for her to confidently take on the challenge of meeting the tight production deadlines.

In addition to the premiere of More Than Dance, We Are A Movement, which streams on demand exclusively in Canada from April 14 to April 20, Red Sky Performance is poised to take Trace on tour in the fall of this year, across Canada and in the United States.

If the tour goes forward as planned this will be the company’s first international tour since the onset of the global pandemic.

Red Sky Performance has an extensive history of touring, encompassing more than 2,750 performances in 17 countries on four continents.

“There's always risk in many ways,” says Laronde. “But we will mitigate that risk and we will have different plans in place, different strategies, so that we're ready for anything that's going to be thrown at us.”

Tickets for the limited seven-day video on demand stream of the Red Sky Performance documentary, More Than Dance, We Are A Movement can be purchased for $15 plus applicable taxes online at https://www.harbourfrontcentre.com/