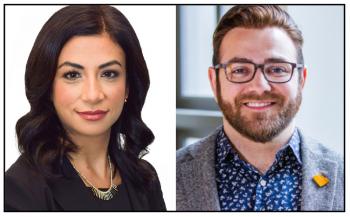 “Copyright is just ill-suited to protect the Indigenous right, so there is a gap in the law. In terms of providing protection through (the) copyright regime, there’s no community ownership.” — Yvan Guy Larocque
By Shari Narine
Local Journalism Initiative Reporter
Windspeaker.com

Innovation, Science and Economic Development Canada may be intending to create an intellectual property strategy that is more inclusive of Indigenous peoples, but right now that suite of copyright protection and ownership is falling short.

Larocque joined legal counsel Natalie Rizkalla-Kamel recently on a webinar hosted by the Intellectual Property Institute of Canada on Indigenous arts and culture, which focused on copyright and related issues.

The institute is the professional association of patent and trademark agents and lawyers practising in all areas of intellectual property.

“Unfortunately there are limits in terms of what you can do about cultural appropriation with respect to copyright,” she said.

The underlying goal of copyright protection, as it exists now, is limited because it identifies an owner; it expires after a set timeframe; it protects expression or an idea; and it must be fixed (written). All these points, said Rizkalla-Kamel, are counter to traditional knowledge and cultural expressions, which are orally passed down through generations.

“Copyright is just ill-suited to protect the Indigenous right, so there is a gap in the law,” said Larocque. “In terms of providing protection through (the) copyright regime, there’s no community ownership.”

According to the Assembly of First Nations, Indigenous people worldwide are concerned with the unlicensed use of their traditional knowledge, which has “no universally accepted definition.”

A study undertaken by the department and the Canadian Council for Aboriginal Business in 2019 makes that point clear.

The results from that study were recently released and show that 60 per cent of Indigenous businesses use traditional knowledge or cultural expressions but only 20 per cent have intellectual property protection, the most common being copyrights (10 per cent) and trademarks (nine per cent).

However, 28 per cent of traditional knowledge or cultural expression businesses engage with other non-intellectual property protections, including community and customary rules for how it is used.

Indigenous business owners who decided not to use intellectual property protections said they perceived little benefit from them and thought it too expensive to file and register.

Still, the department has Indigenous Intellectual Property Program grants available to Indigenous businesses to fund travel, “small-scale” initiatives and projects that deal with Indigenous knowledge and Indigenous cultural expression, according to their website.

“Essentially the goal is to work with Indigenous peoples to take a look at Canadian laws and how they (can) be changed to ensure that Indigenous rights are protected,” said Larocque.

“(There) needs to be an expansion of that (copyright) act to include Indigenous rights or there needs to be new laws to apply to Indigenous traditional knowledge, cultural expression.”

Until then, Rizkalla-Kamel says, although the current intellectual property system isn’t suitable for protecting traditional knowledge or cultural expressions, there are some tools that can be used. If a business meets the copyright requirements, she says go ahead and file.

Public authority can also be used to give notice on official marks, such as a badge, crest or emblem, on products which prohibits anyone else from claiming them.