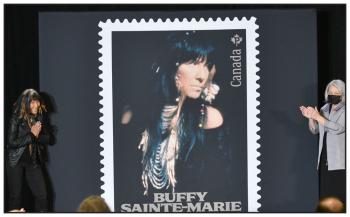 Buffy Sainte-Marie, singer-songwriter, and Mary May Simon, Governor General of Canada, and Suromitra Sanatani, chair of the Board of Directors of Canada Post, (not shown) unveil the commemorative stamp featuring Buffy Sainte-Marie at the National Arts Centre in Ottawa, on November 18. Photo by Denis Drever

“Hopefully it'll impact our own people in a real good way as they walk forward. I can tell you that it is not easy to come from some small reserve when you've just been like... nobody.” — Buffy Sainte-Marie
By Adam Laskaris
Local Journalism Initiative Reporter
Windspeaker.com

Singer-songwriter Buffy Sainte-Marie is the latest artist to be recognized by Canada Post for her achievements.

Put into circulation are 180,000 stamps with Sainte-Marie’s image on them. The design was officially unveiled on Thursday at a ceremony in Ottawa hosted at the National Arts Centre.

“I know I'm going to be sending a lot of postcards and Christmas cards this year,” said Sainte-Marie with a laugh at the start of her speech.

“I really want to thank Canada Post for this remarkable thing in my life. I was one of those little girls who collect stamps.”

Born on the Piapot First Nation in southeastern Saskatchewan’s Qu’Appelle Valley, Sainte-Marie grew up in New England with adoptive parents. She turned to music at a young age, officially launching her impressive career in the early 1960s.

Sainte-Marie has won countless awards over the years. Among her biggest accomplishments are an Academy Award and Golden Globe in 1983 for the original song “Up Where We Belong”, a 1995 induction into the Canadian Music Hall of Fame, and her naming as an officer of the Order of Canada in 1997.

She was subjected to racism, abuse, and having her songs censored from radio airplay. Canada Post has recognized the singer/songwriter for her “unique artistic vision and extraordinary bravery in the face of adversity.”

The stamps are now available at Canadapost.ca as well as in stores across the country.

For $9.20, interested collectors can get a booklet of 10 domestic rate stamps, an Official First Day Cover (OFDC), and a limited edition framed stamp enlargement and OFDC.

Sainte-Marie’s stamp features a photograph by Simon Fowler that was the cover art of Sainte-Marie’s single “The Big Ones Get Away” from her 1992 album Coincidence and Likely Stories.

“I was so glad to be able to share his beautiful photo with the world,” Sainte-Marie said.

Sainte-Marie hopes that her stamp recognition, as well as her career path, can help to inspire younger Indigenous generations.

“Hopefully it'll impact our own people in a real good way as they walk forward,” Sainte-Marie said. “Because I can tell you that it is not easy to come from some small reserve when you've just been like... nobody.”

Andrea Warner, who wrote Sainte-Marie’s biography, recognized Sainte-Marie’s ability to tackle themes such as genocide and colonization through her work.

“Like many of us, she finds a way to laugh through the hard stuff,” Warner said. “This helps Buffy convey some of the most difficult truths. Buffy is a lighthouse, a trailblazer, and a touchstone. She builds up instead of tearing down, she leads by example, and she never gives up. I’ve said it before and I’ll keep saying it again for the rest of my life, we are so lucky to be alive in the time of Buffy Sainte-Marie.”

Among those in attendance giving speeches in honour of Sainte-Marie was Perry Bellegarde, former national chief of the Assembly of First Nations.

“I've said this before. One does not have to be elected to be a leader,” Bellegarde said. “And Buffy Sainte-Marie is not elected, but she's a strong leader, a visionary, and she's had such a huge impact globally standing up for our rights, social rights, fundamental human rights, our treaty rights.”

Bellegarde said Sainte-Marie’s activism has “made chiefs and leaders’ work a lot easier.”

He also went on to recognize Canada Post’s role in uplifting Sainte-Marie’s platform.

“Especially in Canada and in the spirit of reconciliation that we’re all walking together, it’s a very important night,” Bellegarde said.

Award-winning filmmaker Alanis Obomsawin gave Sainte-Marie praise via a video message, saying that she “didn’t know anyone like her.”

“I think Buffy has made a mark that we all feel,” Obomsawin said. “She’s our sister, talking for us. She’s made a difference into fighting for change and she has accomplished a lot of changes in the minds of people, the attitudes of people. I think just through her singing she is like a book after reading. You learn something and think differently after.”

Randy Bachman, the guitarist and vocalist of legendary bands Bachman Turner Overdrive and The Guess Who, also praised Sainte-Marie.

“I’ve recorded and played with her many times, many gigs,” Bachman said. “She’s an incredible songwriter, singer, actress. She’s a great artist, a great human being, and Canada’s queen of music.”