Canada, Grassy Narrows at odds over what the community needs to treat mercury poisoning in their people 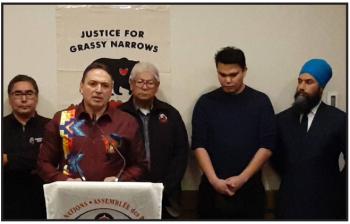 Assembly of First Nations Perry Bellegarde makes a statement about ongoing efforts to move Canada to live up to its promise to build a treatment centre in Grassy Narrows. Photo courtesy of AFN.

“The Liberal government has promised to do something and they are dragging their feet. We’ve seen the Prime Minister move very quickly when it’s a priority …. But when Indigenous people are asking for basic human rights like drinking water, there’s a delay." —NDP leader Jagmeet Singh
By Shari Narine
Windspeaker.com Contributor

For Elder Bill Fobister, Sr., the effects of mercury poisoning and the lack of a mercury care home in his community of Grassy Narrows First Nation are real and personal.

To have to live somewhere else in order to get treatment when the impacts of the mercury poisoning he is suffering from have become too much is “my greatest fear. I’ve never lived anywhere else in my whole life,” said Fobister.

Many of those suffering from mercury poisoning have to leave the community for treatment.

With a mercury care home, said Fobister, children can stay home, including his own grandchildren who are also suffering from mercury poisoning.

“I know they’ll never get better, but at least they’ll be home with their families where we can really have a good life, remaining life for each of our families and children,” he said.

Assembly of First Nations National Chief Perry Bellegarde took time out from the Special Chiefs Assembly on Tuesday to stand with Fobister, Grassy Narrows Chief Rudy Turtle and youth Rodney Bruce and Darwin Fobister, Ontario Regional Chief RoseAnne Archibald, and NDP leader Jagmeet Singh to call out the Liberal government for not delivering on a mercury care home for the community.

“Especially in this era of reconciliation and working together and respect for the (United Nations) declaration, respect for fundamental human rights, this really is something we have to keep pushing this government for,” said Bellegarde.

Singh also admonished Trudeau for not delivering on “basic human rights” and pledged that he would work with the community of Grassy Narrows.  Chief Turtle was an NDP candidate in the federal election.

“The Liberal government has promised to do something and they are dragging their feet. We’ve seen the Prime Minister move very quickly when it’s a priority …. But when Indigenous people are asking for basic human rights like drinking water, there’s a delay. When they’re asking for basic human rights like a treatment centre, there’s a delay. The delay must end,” said Singh.

For almost 50 years, Grassy Narrows First Nation has suffered with mercury in its water due to industrial pollution.

For the past two years, said Turtle, talks have been ongoing between his community and the federal government about taking action to help the people of Grassy Narrows. But that talk has wielded no concrete results.

At issue, said Turtle, is a disagreement to what kind of facility should be built in the community. While Grassy Narrows is pushing for a specialized mercury treatment centre, the federal government wants to build an assisted living facility.

“It’s completely two different things and that’s where we’re stuck at. I don’t know what we have to say, what we have to do to tell them that this thing is about mercury. It’s not about an assisted living home … we would love that, too, but our main thing here is the mercury home,” Turtle said.

Turtle said a mercury care home would be a place where people can be diagnosed and treated. Research on mercury poisoning would also take place.

Archibald urged the federal government to commit to the solution being proposed by Grassy Narrows and to act now.

“Indigenous justice must be high on the agenda of the new parliament and this is one way to show that. That those promises made will be kept. The mercury care home is a clear tangible example,” she said.

Turtle said he would be meeting with the new Indigenous Services Minister Marc Miller for the first time on Thursday.