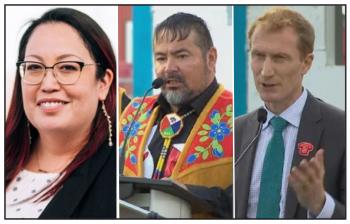 “Original descendants often feel like they’re cut out of any representation when it comes to leadership, chief and council, anything like that. When it came to negotiations for the settlement itself, many of the original descendants felt their voice wasn’t being heard.” — Peepeekisis Cree Nation member Cheyanne Desnomie
By Shari Narine
Local Journalism Initiative Reporter
Windspeaker.com

Almost a year after the federal government concluded a $150-million settlement with Peepeekisis Cree Nation for the File Hills Colony Scheme, Crown-Indigenous Relations Minister Marc Miller was in the southern Saskatchewan community to deliver an official apology, some of it in Cree.

“The government of Canada …. (is) acknowledging the wrongs of the past and we're taking another step toward reconciliation and a renewed nation-to-nation relationship. It's our hope this apology does help with healing within the community,” said Miller on Aug. 3.

The File Hills Colony existed from 1897 to 1954 and consisted of hand-picked graduates from Indian residential schools and industrial schools, primarily in Saskatchewan and Manitoba, with a few coming from Alberta. They were forced to farm prime agricultural land that an Indian agent took without consent from the Peepeekisis Cree Nation, located in the Qu’Appelle Valley.

“On behalf of Canada I apologize for these actions. They caused great harm to your community, your language and your culture and for this we are deeply sorry,” said Miller.

Peepeekisis Chief Francis Dieter called the apology “one step of many steps towards reconciliation."

The federal settlement provides the nation the option of adding as much as 18,720 acres to its reserve land. A trust has been established to allow for community-based projects and infrastructure improvements. The settlement also paid members $10,000 each.

The settlement was decades in the making.

In a 2019 letter to band members, Dieter explained that the band submitted a specific claim in 1986 in which the Indian Claims Commission found Canada breached its lawful obligations to the band. It was then recommended that the claim be entered for negotiation under Canada's Specific Claims Policy.

However, Canada responded with court action, which forced the nation to reframe its original argument in 2017. Negotiations with Canada began that year and led to the settlement agreement that was presented to members for ratification in December 2020.

In offering his apology, Miller acknowledged that the File Hills Colony Scheme is not known well known to many Canadians.

Researcher and Peepeekisis Cree Nation member Cheyanne Desnomie says the File Hills Colony Scheme is not well known to the Saskatchewan public either. She’s hopeful Miller’s apology will change that.

“Every time I talk to people about (the File Hills Colony Scheme) they’re so shocked this took place in our backyard. As far as my research goes, this is the only instance of something like this happening, not just in Canada but in North America,” said Desnomie, who is with the research office of the First Nations University of Canada.

“This” includes “one of the more disturbing aspects…(of) eugenics implications” as many colony participants were chosen because of their mixed blood. It was Indian agent William Graham who developed the scheme and who chose the participants. Graham felt that the European blood mix made them smarter and more obedient. Marriages were arranged to further that blood line.

Eugenics is the study of arranging reproduction within a human population to increase the occurrence of desirable characteristics. Its principles were adopted by the Nazis to justify mistreatment of Jews and other minorities. It has been discredited as unscientific and racially biased.

Desnomie wrote both her bachelor’s honour and master theses on different aspects of the colony, including how it has informed the “contemporary environment” of the nation.

Graham developed the Files Hill Colony Scheme with the “intent of assimilating the Aboriginal population and converting the traditionally nomadic people to an agriculture lifestyle,” wrote Desnomie in her master thesis, and as a means to demonstrate how the “Indian Problem” could be dealt with.

Every aspect of colony life was controlled from what time people got up in the morning to the women having to belong to sewing circles to producers requiring permission to sell what they grew. Even then, says Desnomie, members were never told how much each product was sold for and only received a small portion of the profits.

Colony members and Peepeekisis members were forbidden to interact, including not being allowed to speak with each other.

The colony fell apart in the mid-1950s as the result of “the perfect storm of things combining and unravelling,” says Desnomie.

Graham became embroiled in a “giant scandal” involving the sale and transport of alcohol across reserve land which forced his retirement in 1942, leaving the colony “unofficially abandoned.” There was also jealousy and animosity of non-Indigenous farmers at the success of the colony. Then the incredible growth in the population experienced by the band came under scrutiny.

In the late 1950s, a commission decided that those people placed into the colony would be considered Peepeekisis Nation members as they no longer had connections to their ancestral lands.

“Original descendants often feel like they’re cut out of any representation when it comes to leadership, chief and council, anything like that. When it came to negotiations for the settlement itself, many of the original descendants felt their voice wasn’t being heard,” she said.

“That’s where a lot of hard feelings come from… (but) I think the reserve is working toward healing that divide. Just to be honest and blunt about it, it’s still there,” said Desnomie.

It’s something Chief Dieter, a placement descendant, has recognized.

“The File Hills Colony Scheme left a legacy of division. However, through the recent settlement and the acknowledgement of its wrongdoing, Canada's apology to our Nation and our people, can allow us to move forward on our path to healing our Nation and becoming one people of Peepeekisis," said Dieter.

Miller said reconciliation would be defined by the Peepeekisis Cree Nation.

“We need to sit down and keep talking together and moving our relationship forward. It does come with money. Reconciliation ain’t free, but it also comes with better relationships and renewing them in the way that communities are telling us to do,” he said.