Canada continues to fail Indigenous women under the Indian Act 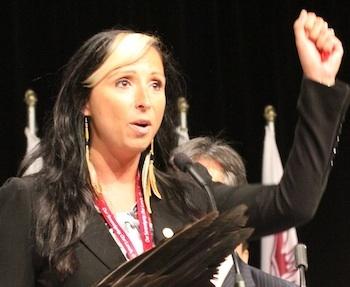 “Every time they just tinker with it a little tiny bit, they create new forms of discrimination and leave out people and they have to tinker with it again to try and fix that,” she explained.

The bill comes in response to the Superior Court of Quebec decision in the case of Descheneaux et al., v. Canada.

“What they’re doing is what they always do, a very piece-meal, facts-specific amendment that generally addresses only part of the concerns raised in a case.” Palmater points to the Lovelace and McIvor cases as examples.

The McIvor case in 2009 tackled that issue and brought about Indian Act amendments in 2010.

The cousins’ issue addresses the treatment of first cousins whose grandmother lost status due to marriage with a non-status Indian, when that marriage occurred before April 17, 1985.

The siblings’ issue addresses the treatment of women who were born out of wedlock of Indian fathers between Sept. 4, 1951, and April 17, 1985.

The issue of omitted minors addresses the treatment of minor children, compared to their adult or married siblings, who were born of Indian parents or of an Indian mother, but lost entitlement to Indian status because their mother married a non-status Indian after their birth, and between Sept. 4, 1951, and April 17, 1985.

Palmater said the answer to all this tinkering is simple enough.

That’s exactly what the United Nations has said.

Palmater is fresh back from testifying in Geneva in front of the UN Committee for the Elimination of Discrimination against Women. Canada also had a delegation present.

“(The UN’s) very first question to the Canadian delegation was why are you not addressing all of the gender discrimination in the Indian Act? Canada’s response was we have to address Descheneaux by February,” said Palmater.

The Superior Court of Quebec gave Canada until Feb. 3, 2017 to make the necessary legislative amendments.

While the Native Women’s Association of Canada has commended the government for introducing Bill S-3, NWAC states in a news release that there are still “other misogynist laws that have been discriminating against Indigenous women and girls for centuries.”

NWAC notes that Dr. Lynn Gehl, in ongoing litigation, has identified the unknown or unstated paternity policy, in which the government asserts that lack of a father’s signature on a birth certificate means the father is a non-status Indian.

“Even worse,” said NWAC, “the unknown or unstated paternity policy applies to Indigenous mothers whose children were conceived through the violent acts of sexual assault, incest, rape or prostitution.

“This adds further insult to injury by depriving her children of the socio-economic and cultural benefits of status Indian-ship and First Nations citizenship.”

Palmater says the government does not have to – nor should it – wait until court decisions have been rendered before it takes action to address all gender inequities in the Indian Act.

In moving forward on Bill S-3, the federal government says it will begin a collaborative process early next year with First Nations and other Indigenous groups to examine the broader issues relating to Indian registration, Band membership and citizenship.

Palmater points out that Bill S-3 prevents those who have been wrongfully discriminated against from getting compensation. She says it’s just one more indication of the continued discrimination Indigenous women face.