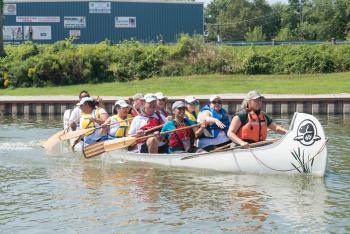 Members of the Caldwell First Nation in southwestern Ontario set off on a fundraising paddle to help with monitoring and improving the health of Lake Erie. The trip helped to raise more than $9,000 for testing kits and to help plant native trees and shrubs along the lake’s shore. (Photo provided by Caldwell First Nation).

“Our Mother Earth, air and waters need so much continued help, and we are the original caretakers of this land. It is our job to care for it so that the next seven generations can live here too.” — Anellah Orosz, youth environmental coordinator with the Caldwell Youth Council
By Colin Graf
Local Journalism Initiative Reporter
Windspeaker.com

On a blistering 30-degree August day, members of the Caldwell First Nation in southwestern Ontario tackled two-foot swells on Lake Erie in canoes to raise money for protecting and improving the lake’s health.

On Aug. 28, about 15 community members, led by the Caldwell Youth Council, paddled four km across a span of open lake between the town of Leamington’s harbour and a local marina for this year’s edition of the Lake Erie Challenge.

The event was staged to raise funds and awareness about the challenges Lake Erie is facing, including toxic algae blooms that affect the health of fish and other aquatic organisms, plastic pollution, invasive species that disrupt the ecosystem, and climate change, according to a news release from the Canadian Freshwater Alliance, the paddle’s organizing group.

Team Caldwell was joined by paddle boarders and wingfoil boarders from the Alliance and the Lake Erie Community Paddlers.

“It is Caldwell First Nation’s right and responsibility to use, possess and protect the air, waters, lands and resources as it has from time immemorial,” the band council states in support of the event. “Working with Mother Nature to preserve and protect the waters is the Youth Advisory Committee’s main goal as they work to obtain personhood status for Lake Erie.”

Anellah Orosz is youth environmental coordinator with the Caldwell Youth Council. “Our hope is to draw awareness towards the health of the lake, but also the importance of our connection to the water. We want to demonstrate that the water has life and we should treat it as such,” she said.

“Our Mother Earth, air and waters need so much continued help, and we are the original caretakers of this land. It is our job to care for it so that the next seven generations can live here too.”

A news release from the Freshwater Alliance says Lake Erie is “a beloved and indispensable part of our lives. As the most biologically diverse Great Lake, a major drinking water source, and the site of countless memories made, Lake Erie is essential to not only humans, but the well-being of our entire ecosystem.”

The two groups raised more than $9,100 to support the work of the Lake Erie Guardians, individuals, families and community groups who monitor the health of the lake at specific locations using testing kits, said Caldwell member Patricia Kittleberger. That amount is more than the original fundraising goal of $7,500.

As one of the Guardians, or water rangers, Kittleberger visits three locations every month where she tests for ph levels, water alkalinity, and oxygen levels, and reports the data to the Alliance via an app.

She also is trained to look for signs of toxic algae blooms that can pose a threat to drinking water supplies. Such blooms have been a serious problem on Lake Erie in past years. The Alliance will notify nearby operators of drinking water intakes if the algae is spotted, Kittleberger tells Windspeaker.com.

The Guardians also help identify and remove invasive species and plant native trees, shrubs, and wildflower seeds along the shore, and help with shoreline cleanups.

Kittleberger, who was the link between the Freshwater Alliance and Caldwell, hopes demonstrations of water testing put on by water rangers at the event, along with the cross-harbour canoe trip, will persuade more people to get involved in lake monitoring.

While the Alliance moves its Challenge to different stretches of shoreline each year, this year’s event proved so popular with the Caldwell community that the First Nation is considering holding a similar event of its own next year, Kittleberger states.

“This is the beginning of something new for Caldwell,” she says.