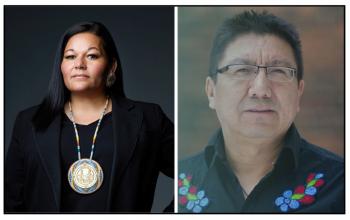 Chiefs will vote on Thursday from 9 a.m. EDT to 3 p.m. EDT. The results will be announced at 3:15 p.m. EDT.
By Shari Narine
Local Journalism Initiative Reporter
Windspeaker.com

With Alvin Fiddler ending his run for national chief and throwing his support behind RoseAnne Archibald for fourth ballot voting to take place tomorrow, the Assembly of First Nations could be on the cusp of having its first woman national chief.

Jodi Calahoo-Stonehouse, whose bid to gain the role came to an end on the third ballot, also voiced her support for Archibald, saying she was “look(ing) forward to seeing a matriarch lead the Assembly of First Nations.”

Calahoo-Stonehouse was automatically dropped from the fourth ballot as her tally of 20 votes was the lowest of the four candidates.

After the third ballot Reginald Bellerose of Saskatchewan had garnered 144 votes, leading Archibald who had 129 votes.

Bellerose has led all three ballots, with this third ballot showing his largest margin over Archibald.

Fiddler had 64 votes and 18 per cent of the popular vote.

To become national chief a candidate has to have 60 per cent of the vote. Bellerose had 40 per cent and Archibald 36 per cent in the third round, which saw 357 chiefs and proxies vote, slightly higher than second ballot voting round.

Fiddler announced his decision to drop out of the race, first on social media about a half-hour before voting closed in the third round, and then in a speech after the results of the third ballot were announced.

“Earlier this evening I spoke with the Elders that are here with me to seek their advice on … how we should move forward….I respect their advice and at this time I will be announcing that I’m withdrawing my candidacy as national chief and even though it’s a difficult decision I know it’s the right one,” said Fiddler.

Both Fiddler and Archibald are from Ontario.