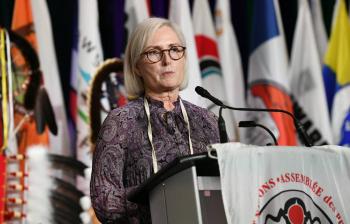 “This is how it works when things change. You have to fight through the process.” — Mary Ellen Turpel-Lafond
By Shari Narine
Windspeaker.com Contributor

As of Jan. 1, 2020, babies born to Indigenous mothers can no longer be apprehended due to birth alerts. However, Mary Ellen Turpel-Lafond knows it will happen despite chiefs standing firm in advocating the removal of that practise in “An Act respecting First Nations, Inuit and Métis children, youth and families.”

The legislation that comes into force in 2020 firmly puts control of the welfare of Indigenous children and families into the hands of First Nations, Inuit and Metis.

“The view that we have with this legislation is that it ends birth alerts and it ends the surprise removal of children in the hospital for First Nations mothers and First Nations families. And I know many in this room have fought very hard for that, but now we’ve got to make sure that happens. So we really need to pull together to be clear about that and to be very clear to the judges and the hospitals and everyone across Canada that that is what this is going to require,” Turpel-Lafond told chiefs at the Assembly of First Nations Chiefs Special Assembly on Dec. 4.

With only weeks to go until the legislation becomes law, Turpel-Lafond, who serves as advisor for the AFN’s chiefs committee on children, families and self-determination, said that the implementation of a “caretaker convention” by the federal government means there has been no discussion on a plan for implementation. That convention prohibited the government from making decisions during the election period.

“Things are going to probably be late breaking because the government has been a bit slow on this matter. I expect it will move pretty quickly,” said Turpel-Lafond.

The government dragging its feet on discussions on implementation has been the subject of numerous letters from the AFN’s National Chief Perry Bellegarde to Indigenous Services Canada, said Turpel-Lafond, noting the latest letter had gone just that day.

In addressing chiefs the previous day, newly appointed ISC Minister Marc Miller held up Bill C-92 as one of his government’s accomplishments, referring to it as a means for self-determination, with Indigenous government’s now having the jurisdiction over the welfare of their own children and families for which they had been advocating for decades. He pointed out the law would come into effect in January, but did not reference the work that still needed to be done to implement those changes.

Turpel-Lafond, who served as child and youth advocate for British Columbia, referred to that shift from provincial and territorial jurisdiction to First Nations jurisdiction as “radical.” She added that research indicates it takes five to seven years for the mainstream child welfare system to fully adjust to such a wholesale change.

“We are in a very unusual situation where we’re a few weeks away from this complete reset coming into effect and many First Nations, chiefs, families are asking how am I going to be able to benefit? We don’t have funding sorted out and other issues,” she said.

“Is it planned and perfect now at this point? Far from it, I would say to you. But this is how it works when things change. You have to fight through the process. You have to go forward. You have to lean into those key things that you negotiated for and that you asserted that are going to bring change.”

Lafond-Turpel stressed that First Nations had options when it came to asserting their jurisdiction, which they could do in steps. They could choose to enter into coordination agreements with their provinces or territories, but did not have to. They could choose to accept an existing relationship with a designated child welfare agency on reserve or an urban agency with the First Nations laws trumping the province’s laws. There would be no distinction drawn between on-reserve and off-reserve children or registered or non-registered Indian children.

Canada has offered to keep a registry for all First Nations child and family welfare laws so no matter where a child is located, the laws of that child’s First Nation would be followed.

“This legislation was designed to support nation building and rebuilding of nations and families. It was not designed to control and gate-keep,” said Lafond-Turpel.

She also reminded chiefs that where they had existing tables for negotiations with the federal government, Bill C-92 now meant that child welfare was no longer part of those discussions.

Lafond-Turpel expects about 15 First Nations will be ready to implement their own child and family welfare systems within the first few months of 2020.

“Because this is about recognition a lot of the work has already been done. It’s like bringing it into this framework to move it forward,” she said.

The chiefs-in-assembly passed a resolution calling for immediate collaboration from the federal government with First Nations and regional bodies “as determined by the rights holders,” as well as for Canada to immediately fund those discussion and commit to funding for the implementation of the act.