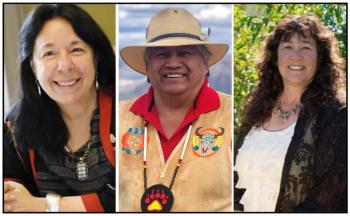 “I’ve gotten pretty angry at the table with them, quite honestly, because for me, they’re … responding with C-92 as if it’s a program… I keep telling them inherent jurisdiction is not a program.” — Kukpi7 Wayne Christian about representatives from Indigenous Services Canada
By Shari Narine
Local Journalism Initiative Reporter
Windspeaker.com

The Splatsin band of the Secwepemc Nation wants other First Nations to experience the success they have had in exercising jurisdiction over their child and family services.

“We’ve been successful at every legal challenge that has come at us. From Splatsin Elders I’ve learned that jurisdictional justice is sometimes a few generations away, but it is inevitable.”

Splatsin hosted a two-day virtual webinar March 24 and March 25 to share with other First Nations the knowledge and experience they have garnered since its Bylaw for the Care of Our Indian Children came into force in 1980. At that time, under the direction of Kukpi7 Wayne Christian, the band lobbied the federal and provincial governments successfully to take control of their children both on- and off-reserve.

However, for 46 other First Nations, who tried to follow in Splatsin’s footsteps, the door was slammed shut on them.

“But for all of those communities, they can do this, exactly what they wanted to do, under Bill C-92 now. We don’t need the mechanism of the bylaw,” said Mandell.

Bill C-92, An Act respecting First Nations, Inuit and Métis children, youth and families, came into force Jan. 1, 2020. It allows Indigenous groups to design and deliver child and family services in the manner that best suits their needs. Indigenous groups would be taking over delivery of these services from the provinces.

Mandell pointed out that with the passing of Bill C-92, First Nations were no longer fighting for jurisdiction. However, she added, the federal government needed to step back to allow that “jurisdictional space (to) be empty, so that Indigenous jurisdictions can flow in in their own way.”

While Splatsin doesn’t need C-92 because they have their own bylaw, legal counsel Bonnie Leonard said the legislation may provide additional protection for Splatsin jurisdiction as well as help avoid further court challenges.

“It sets out national standards and principles in relation to determine the best interest of the children, cultural continuation, and the really important one is substantive equality. These are all factors that have been fought about in courts and in tribunals for years. Now, finally, there’s this piece of legislation that we can rely on as an argument to protect our people and the unfair standards that have been imposed upon us by others,” said Leonard.

As the legislation references fiscal arrangements and substantive equality, the combination provides tools for sustainable and long-term sufficient funding, she added.

However, Christian contends that Indigenous Services Canada (ISC) officials are having difficulty understanding their own legislation.

“I’ve gotten pretty angry at the table with them, quite honestly, because for me, they’re … responding with C-92 as if it’s a program… I keep telling them inherent jurisdiction is not a program,” said Christian.

A coordination agreement sees discussions take place between a First Nation, ISC and the province or territory. The First Nation establishes its laws for family and children services, which prevail over federal, provincial and territorial law. Twelve months is given to reach the agreement once the First Nation formally announces its intention.

“The federal government is just not used to releasing power, entering into co-jurisdictional agreements. They’re good at agreements where they still maintain their policy or their upper hand, (their) control over budget,” said Mandell.

Despite the present situation being “frustrating as hell,” Christian is clear on what the new legislation means.