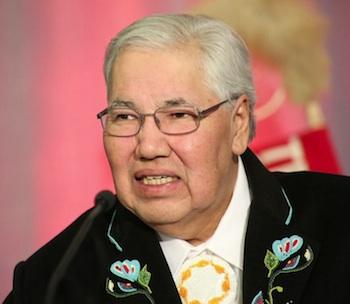 Senator Murray Sinclair, the chair of the Truth and Reconciliation Commission (TRC), is this year’s choice to receive the 2016 Award for Excellence in Aboriginal Relations from the Canadian Council for Aboriginal Business (CCAB) for his “distinguished record of public service”.

Sinclair’s work leading the Truth and Reconciliation Commission “is a shining example of his commitment to Aboriginal people and bringing all Canadians to the forefront and understanding of a national tragedy and injustice,” said sJP Gladu, president and CEO of CCAB.

“For six years Senator Sinclair travelled to communities across Canada to listen to the stories of First Nations, Inuit, and Métis students who were put through Canada’s residential school system. Reconciliation is the key to creating a new relationship, one based on mutual respect and understanding and we are truly humbled to celebrate his life’s work.”

Sinclair had a distinguished career as a lawyer and then Justice for the Queen’s Bench of Manitoba before taking on the chair of the TRC. He was a co-commissioner of the Aboriginal Justice Inquiry, which studied the impact of the criminal justice on Aboriginal peoples in Manitoba, and conducted a six-year inquiry into the deaths of 12 children that resulted in a study that led to changes in pediatric heart surgery in Canada.

Sinclair also served as an adjunct professor at the University of Manitoba and was appointed to the Senate in 2016.

The Award for Excellence in Aboriginal Relations recognizes an individual — Aboriginal or non-Aboriginal —who has contributed, through professional and voluntary commitments, to building bridges between Aboriginal peoples and Canadian society, making a substantial impact across all sectors, socially, culturally, and politically. It highlights the efforts of people who have been ambassadors in working with Aboriginal peoples and communities.

A CCAB press release said Sinclair’s entire professional career has been dedicated to helping Aboriginal communities across Canada, as well as changing practices and procedures in his home province of Manitoba. His work with the TRC has had a significant effect in changing Canada’s approach to Aboriginal peoples and has provided guiding principles to corporate Canada.