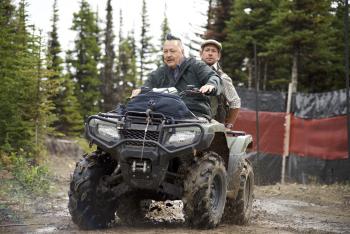 Art Napoleon and British chef Dan Hayes at a caribou camp in Season 5 of Moosemeat and Marmalade. Photo by Calvin Stimson

“Some of the best feedback we get is from people — urban Natives — that never had a chance to grow up around their culture. They tell us how much they learn.” — Art Napoleon
By Adam Laskaris
Local Journalism Initiative Reporter
Windspeaker.com

Thursday marks the return of the popular food docuseries Moosemeat and Marmalade for its fifth season on the Aboriginal Peoples Television Network (APTN).

Throughout the series’ 50 episodes so far, traditional bush cook Art Napoleon and British chef Dan Hayes have travelled to communities across Canada and around the globe to explore culture and culinary traditions and sample good food.

After being delayed from a fall 2020 release for season five due to public health restrictions associated with the COVID-19 pandemic, Napoleon, who also serves as a co-producer on the show in addition to his on-camera role, says he’s ready to see the newest season of the show hit the air.

“A lot of people don’t realize that there’s a lot of work after the filming portion. The filming portion is my favourite because we get to get out and go on adventures with the crew and we meet people doing cool things,” Napoleon said. “Post-production is just hard work,” he added with a laugh, saying that it takes about a year to complete the production of each season from start to finish.

Season five’s premiere will visit the areas around the Site C dam in Treaty 8 territory in British Columbia, while the other 12 episodes in the season sees travel to Indigenous communities across the country, including Skidegate, Haida Gwaii, Cowichan Valley on Vancouver Island, B.C., and Kahnawake in Quebec, as well as overseas in Wales and Ireland.

“After five seasons the excitement is still there, but I’ve kind of gotten used to it a bit more,” Napoleon said, saying that he’s in a ‘media blitz’ while generating interest for the new season. “It’s always exciting because of the communities we film in.”

While much of their work involves visiting remote communities, Napoleon said some of the shows’ biggest fans come from people who don’t get as much of an opportunity to visit these areas often.

“Some of the best feedback we get is from people — urban Natives —  that never had a chance to grow up around their culture. They tell us how much they learn,” he said.

Napoleon credits some of his knowledge on growing up with “a land-based lifestyle” on the Saulteau First Nation in Moberly Lake, B.C. Mostly raised by his grandmother during his early years in elementary school, he learned Cree at home and English in the classroom.

“We were living in two worlds,” he said. “We looked like everyday Canadians. We watched Hockey Night in Canada on Saturday nights, but we were still snaring squirrels and hunting moose and setting up moose camps. A lot of my summers as a kid we’d spend two or three weeks at a time in the deep woods, sometimes with no vehicles. We’d go in on horseback. That was my lifestyle growing up. That’s how I picked up some of the skills that I use on the show.”

Along with his cooking, Napoleon also uses the series to educate and advocate for various causes related to food security and sovereignty, as well as land conservation and restoration efforts.

“Caribou is almost extinct. Moose numbers are down as well,” he said. “I notice certain plants that have gone away. Wild strawberries don’t grow anymore [in some areas]. A lot of berries that once existed in my youth no longer grow.”

He said it’s crucial for governments and business leaders to make changes to their methods of operation instead of continuing to contribute to harmful practices, such as clearcutting forested areas.

“I think there’s only small things individuals can do. It’s a societal problem,” Napoleon said. “Canadian society has created this. Capitalism has created this monster, where there’s never any satisfaction. The capitalist system is designed for perpetual growth every year. Society has to pressure their leaders to make systemic change. Without that systemic change, you can recycle all you want. You can use all the paper straws you want. It won’t make a damn difference.”

Despite the many issues related to Indigenous food and conservation efforts, Napoleon says he finds his work fulfilling.

Moosemeat and Marmalade debuts in English this Thursday on APTN, with French and Cree versions to come at a later date. Check your local TV listings for more information.