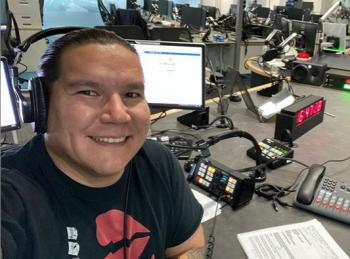 Anishinaabe author and journalist Waubgeshig Rice shared on Twitter his own experience of racist treatment during visits to the hospital.

“We know that our people avoid hospitals because we are afraid of having a discriminatory encounter.” — Leslie Varley, executive director of the BC Association of Aboriginal Friendship Centres
By Adam Laskaris
Local Journalism Initiative Reporter
Windspeaker.com

Late last week, a jarring story emerged about racism directed towards Indigenous patients of the healthcare system in British Columbia.

Health Minister Adrian Dix shared an account of healthcare workers playing a game to guess the blood alcohol content (BAC) of Indigenous people when they entered the hospital emergency room. The game was referred to internally as “The Price is Right”, a reference to the television game show.

While it is unclear exactly how widespread this activity is, one of the hospitals that participated in the game was Saanich Peninsula Hospital on Vancouver Island, reported CBC News on Tuesday.

“I am outraged by reports of ugly, anti-Indigenous, racist behaviour at multiple health-care facilities in B.C.,” Premier John Horgan said in a statement Friday. “This behaviour degrades the standards and provisions of health care in our province... There is no explaining this away.”

Horgan and Dix announced an investigation would be led by Mary Ellen Turpel-Lafond, a former judge and B.C.’s first-ever appointed Representative for Children and Youth. Subsequent recommendations would be made to the province.

While these types of incidents contribute to harmful stereotypes about Indigenous peoples and substance issues, they are indicative of a larger culture of negligence and bias against Indigenous populations within the Canadian healthcare industry.

A joint release published by the BC Association of Aboriginal Friendship Centres (BCAAFC) and Métis Nation BC (MNBC) detailed the provincial healthcare system’s complicity in discriminatory practices. The BCAAFC and MNBC provided a list of recommendations in dismantling systemic issues, including “ensuring that Indigenous governments play a stronger role in the development and implementation of anti-racism programs and training.”

“There remains a lack of will to address systemic and specific racism towards Métis, First Nation and Inuit people,” said Leslie Varley, executive director of the BCAAFC.

“We know that our people avoid hospitals because we are afraid of having a discriminatory encounter,” Varley stated. “This happens to the point where Indigenous people end up in emergency with extreme diagnosis, like cancer.”

A March 2019 think tank by the San’yas: Indigenous Cultural Safety Training Program said perceived substance issues are often at the centre of interpersonal racism occurring “due to gaps in knowledge, education, skills and awareness of those working within the healthcare system.”

The panel detailed an incident where a healthcare worker stated that an elderly Indigenous woman “must be drunk again” after she had vomited in an emergency room. The woman, in fact, had not been drinking and did not have a history of heavy drinking, but rather had cancer and was ill as a result of chemotherapy treatments.

The think tank highlighted other examples of racism, including poorly funded Indigenous health services, dismissing patient concerns, or not believing patients, and a lack of accountability on the implementation of anti-racism solutions.

Examples of the healthcare system working against Indigenous patients are not confined to B.C.

In 2008, Indigenous double amputee Brian Sinclair was left untreated for more than 30 hours in a Winnipeg hospital for a catheter change before dying in the waiting room due to complications of a treatable bladder infection.

It was then concluded in a Manitoba courtroom that hospital staff made incorrect assumptions that he was a homeless person seeking shelter in an intoxication-induced sleep and that he had already been seen.

“I think most Indigenous families have some story of racism they experienced in the Canadian healthcare system,” said Anishinaabe author and journalist Waubgeshig Rice. He shared his own encounters on Twitter.

Rice documented comments and questions from healthcare workers, including being “probed excessively about drug and alcohol use” during hospital visits.

Following receiving news of his cousin’s death by suicide six years ago, Rice’s uncle began to experience chest pains while their family was mourning in the community of Wasauksing. Rice’s father took him to the hospital in nearby Parry Sound, Ont.

“The first thing they asked both of them when they got to the emergency room was if they were both drunk,” he said. “Both of them have been sober since the 1990s. I consoled him, and felt really angry and sad for both of them. Here are two men grieving the loss of their young nephew, and they can't even get compassionate health care in their time of need.”

Rice said there is a lack of awareness about Indigenous peoples at all education levels. While all Ontario healthcare professionals have been required to take an Indigenous cultural sensitivity training course since 2016, this approach has not been adopted in all provinces, including B.C.

“Many people who are health care professionals today didn't properly learn about colonialism and the impact of the Canadian government's oppressive assimilative tactics on Indigenous peoples,” Rice said. “They didn't learn about the ongoing tragic legacy of residential schools and the Indian Act. They're unaware of the ongoing cycles of intergenerational trauma.”

“The systems that train these professionals need to be better in addressing their own ingrained racism,” he said. “People's lives are at stake.”