Blackstock flattered, but won’t run for leader of the NDP 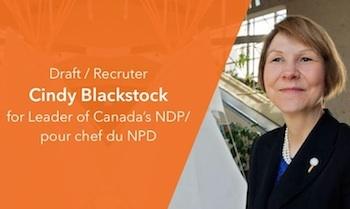 “In life you’ve just got to think about where you’re best suited, where you can make the biggest contribution, and for me, right now, that’s outside of politics,” said the executive director of First Nations Child and Family Caring Society of Canada.

Blackstock – and her organization – have been the driving force behind equal funding for children living in care on reserve. The society joined with the Assembly of First Nations in 2007 to file a claim with the Canadian Human Rights Commission against Aboriginal Affairs asserting that First Nations family and child services agencies received less funding to do their work on reserve than the provinces spend for children in care off-reserve.

This past January, the Canadian Human Rights Tribunal sided with Blackstock and the AFN and ordered the new Liberal government to ante up the money needed to level the playing field. But the Trudeau government has been dragging its heels and Blackstock has been vocal about that disappointment, especially when the federal budget was delivered in March.

Although nearly $635 million was allocated over five years to strengthen services for First Nations child welfare, only 15 per cent of that funding was to come in the 2016-2017 fiscal year. An additional $99 million was scheduled for the following fiscal year. Fifty-four per cent of the funds were slated to come during the 2019 election year and the year following.

That breakdown was unacceptable, said Blackstock.

Earlier this month, a Twitter account and Facebook page entitled “Draft Cindy Blackstock for leader of Canada’s NDP” went online. And that was when Blackstock found out that someone had thrown her name into the ring.

“That’s a movement started without anyone talking to me. It’s flattering, but I’m not running,” she said.

It’s not the first time others have tried to draft her for prime minister – or as leader for the NDP. At the NDP convention in Edmonton last April, delegates voted to review Tom Mulcair’s leadership and Jenn Jefferys started a petition to support Blackstock as leader. Jefferys said Blackstock was “fiercely persuasive and stands up for what she believes in. Her principles align with the traditional social democratic principles of the New Democratic Party.”

While Blackstock did speak at the NDP convention, she admits that she doesn’t have a membership in any party. Even her voting strategy doesn’t lean in any definite direction.

“I don’t vote by party. I vote by the ethics and the practises of the party at the time,” she said.

Blackstock says she’s also been approached to run as national chief for the AFN.

“I’m honoured that people would even think of me in those capacities. Those are very heavy responsibilities,” she said.

Blackstock says she wants to continue to direct her energy toward helping children and families on reserve.

“At some point in the future, if Canada continues to violate these orders, maybe I would think about a different strategy like that, but not at this point,” she said.