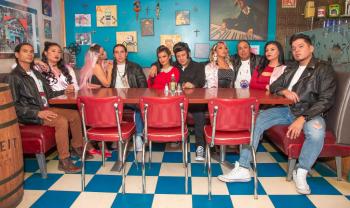 The cast and crew of Bear Grease are excited to be heading out for the next leg of their tour, which includes performances in Calgary, starting Dec. 1, and Edmonton, starting Dec. 8, with dates in the U.S. also in December.

The play is a parody of the 1978 original musical, Grease, but with an Indigenous twist. Take for example the name of the show. It pays homage to a substance used for centuries for its healing properties.

“Bear grease is more sacred and a medicine for our people—therapeutic, powerful, and it just had a nice ring to it,” said Crystle Lightning, the director and choreographer. “Bear grease is universal.”

She said they’ve added Native jokes, culture, language. “We sing “Stand By Me” in Cree.”

“We add the Native humour in there and also in our wardrobe.”

Lightning and her husband, MC RedCloud, worked on the script during the pandemic. In 2021, when asked if they would perform their DJ show at the Fringe Festival in Edmonton, they asked if they could perform Bear Grease instead.

“That was the greenlight. We only had a month-and-a-half to get it cast, get it rehearsed, for the very first date at the fringe,” Lightning said.

It was sold out for both performances and from there its popularity grew and communities started requesting Bear Grease to perform at various venues across Canada.

The show is based in the 1950s, when poodle skirts and bow ties were fashionable. The costumes for Bear Grease is a mix between those garments and Indigenous clothing, such as ribbon skirts and beaded jewellery.

The integration of the two styles is a chance for Elders from the era to enjoy the fashion. Everyone is asked to come dressed up in clothing from that period in celebration.

“We want to celebrate this era of music. It is Motown. It is a doo-wop,” said Tammy Rae Lamouche, who plays Betty Rizzo. “It’s celebrating a time that our Elders couldn’t celebrate, because of residential schools, because of the Sixties Scoop. So we are honouring them, but it is also showcasing that part of history and that humor, that joy, for the younger audience too. That’s what we talk about at the end of every show when we do our standing ovation. That we are celebrating with the Elders, who weren’t able to celebrate during this time because they were going through it.”

They have changed songs to reflect the Native experience too, such as changing “Summer Lovin’” to “Summer Snaggin’”, and have added Treaty 6 slang into the script.

When they travel to different areas across Turtle Island, they change out some of the script to reflect the slang and terms of the area where they are performing.

“We try to use some of the slang in our skits to make it more based on their slang in each community,” said Lamouche. “We change it up each time. We change the last names too.”

“The slang culture for Cree is hilarious. It’s like pop culture now for Natives. Our Native pop culture. I love it,” she said. “That’s the beauty of this show. It is for all audiences. It’s for our Elders. It’s for the young generation to be proud of who they are.”

They also will change up certain names of the characters to mirror the community they are in. For instance, when they go to northern Alberta, Danny’s last name is Cardinal. When they are in Calgary, it is Crowchild.

They also reach out to communities in the area prior to their upcoming performances and request two local dancers from the area to participate in the show.

“We ask for powwow dancers who want to be part of the show,” said Lightening.

In total there are 10 actor/actresses and the two local dancers in the all-Indigenous cast.

For more information on the tour or to purchase tickets, please visit Beargreaselive.com