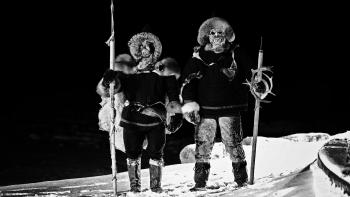 “The most rewarding part for me is creating something that will be around for people to enjoy and to learn about forever.” — Jennie Williams
By Sam Laskaris
Local Journalism Initiative Reporter
Windspeaker.com

It turned out to be an award-winning world premiere for Jennie Williams.

The Inuk filmmaker had her work, Nalujuk Night, shown for the first time to an audience at the FIN Atlantic International Film Festival, which was held Sept. 16 to Sept. 23 in Halifax.

Following the completion of the eight-day festival, Nalujuk Night was named the winner of the Best Atlantic Short Documentary at the event.

Nalujuk Night is about an Inuit tradition in Nain, located in Nunatsiavut, an autonomous area claimed by the Inuit in Labrador.

The tradition features a Nalujuk, a scary-looking character that is rumoured to come in from the Eastern sea ice. The plural, Nalujuit, are beings wearing animal furs and seal skin boots who look truly frightening.

Upon reaching the streets of Nain, the Nalujuit visit community homes and despite their imposing figures hand out bags of treats to children who sing for them.

The Nalujuit also meet and greet community residents who come out to the streets. Those who are believed to have been good during the past year are rewarded with handshakes and goodies.

But if a Nalujuk believes one has misbehaved, a chase ensues. And once caught, the Nalujuk utilize a large wooden stick to (gently) strike those who have been perceived to have acted badly.

Though some might view the Nalujuk night as scary, its main purpose is to bring community members together to celebrate their culture and tradition.

Williams, who is also a visual artist, has had her professional photographs of Inuit life appear in numerous magazines.

She’s also taken photos of Nalujuk night in Nain for a dozen years.

Williams explained why she decided to take her work to the big screen.

“Having photographed the unique tradition of Nalujuk night in Nain, Labrador, I wanted people to experience Nalujuk night just like I did, see what I saw, and in the way that the night made me feel,” she said.

Williams said she felt it was necessary to make a film so others could better understand what Nalujuk night is also about.

“During the previous years of having my Nalujuk night photos in exhibits, I would get many questions because nobody had seen anything like it before and wanted to know all about it,” she said.

“I always tried explaining it the best I could and I always thought to myself, it would be awesome to have a film so people can see for themselves what Nalujuk night is and how it is celebrated today in Nain.”

“I wanted people to have the feeling like they were there themselves, experiencing the night,” she said. “I took all of my best memories from Nalujuk night and put them into this film.”

Williams is proud of the finished 13-minute short.

“The most rewarding part for me is creating something that will be around for people to enjoy and to learn about forever,” she said.

“I know how truly unique it is and how anyone viewing it will get to see something they might never have gotten the chance to experience. A glimpse into life in northern Labrador in a small beautiful town that still celebrates a tradition that was celebrated many years ago.”

Nalujuk Night will also be screened at several upcoming festivals across Canada.

For starters, it will have its western Canadian premiere at the Vancouver International Film Festival, which begins Oct. 1 and continues until Oct. 11.

It will also be shown at Festival nouveau cinema, which runs Oct. 6 to Oct. 31 in Montreal.

That will be followed by a screening at the St. John’s International Women’s Film Festival running Oct. 14 to Oct. 18 in Newfoundland.

Nalujuk Night will also play at the imagineNATIVE Film + Media Arts Festival being staged Oct. 19 to Oct. 24 in Toronto.