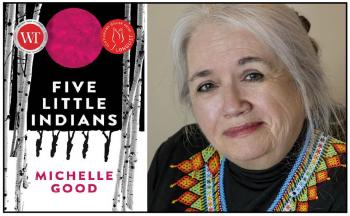 Author Michelle Good with the cover of her book Five Little Indians.

“I do get up at 5 every morning, but I don't set a particular amount of time to write. I just am driven by the intensity of the writing itself and I write until I've run out of things to write.” — Michelle Good
By Adam Laskaris
Local Journalism Initiative Reporter
Windspeaker.com

Update: Five Little Indians by Michelle Good is the winner of the 2020 English-language Governor General Literary Award in the Fiction category, the Canada Council for the Arts revealed June 1. See the announcement here: https://windspeaker.com/news/windspeaker-news/five-little-indians-chose…

Author Michelle Good has seen quite a number of accolades come her way for her debut novel Five Little Indians, but the reality of the book’s success hasn’t fully set in, she said.

“I am in a state of gracious shock,” Good told Windspeaker.com in a recent interview, adding that she’s been ‘bombarded’ with media and speaking requests as word of the book continues to get out.

Nominated for the Governor General’s Literary Award in the Fiction category, to be announced on Tuesday, Five Little Indians tells the story of five young students at residential school in British Columbia.

“The paths of the five friends cross and crisscross over the decades as they struggle to overcome, or at least forget, the trauma they endured during their years at the Mission,” the description of the book reads.

Five Little Indians won the Amazon Canada First Novel award, was a finalist for the 2020 Atwood Gibson Writers' Trust Fiction Prize, was on the Scotiabank Giller Prize longlist, and made it onto the Globe and Mail, CBC, Apple, Kobo, and Indigo Best Book of 2020 lists. The book is also up for an Indigenous Voices Award to be announced in late June.

“Every time the book gets a greater profile, there are more hearts and minds that can be opened to the direct and intergenerational impact of the residential school legacy, and perhaps it will contribute to an ongoing and a better participation in reconciliation.” It’s a sentiment that rings particularly clear after last week’s announcement that the remains of 215 children had been discovered in an unmarked mass grave at the Kamloops Indian Residential School in B.C.

Before being published, Five Little Indians was something Good had been working on for nearly a decade.

Good said the writing process for the book, released in 2020, began back in 2011 while she was studying for a graduate degree at UBC.

“I made the decision that I was going to do a Masters of Fine Arts specifically to write this book,” Good said.

After finishing up the degree, Good decided that she’d spend the next couple of years fine-tuning the work until she was satisfied with the result.

“I wanted to let it grow beyond the confines of thesis requirements,” Good said, adding she’s happy to let her writing take as long as necessary.

“I’m not one of those really disciplined persons,” she said. “I do get up at 5 every morning, but I don't set a particular amount of time to write. I just am driven by the intensity of the writing itself and I write until I've run out of things to write.

“I let it gestate and let it carry on and carry me to the next moment when it's flowing freely,” Good said. “I really prefer living in quiet, rural places. I have a beautiful eight-foot picture window that looks out over a lake and it's very inspirational. That's where I write,” Good said.

Good is now working on a new novel inspired by her own family history.

“It speaks to a broadly characterized, fictionalized version of my great-grandmother,” Good said. “She was born in 1856 and I was born in 1956. There’s a really nice symmetry there.”

Good is a descendant of the Battle River Cree and a member of the Red Pheasant Cree Nation. Her great-grandmother was part of the 1885 Frog Lake uprising. Her uncle was Chief Big Bear.

“She never saw a non-Indigenous person until she was in her late teens, maybe early 20s,” Good said. “This book is an articulation of the history of ‘clearing the Plains’ through the eyes of an Indigenous woman who had cleared the Plains without the interference of White people, or I should say, colonizers, for a period of time, and then experienced the extreme impact of what it meant to have those cultures clash.”

Good was a practicing lawyer and professor for much of her professional career, with a law degree from UBC. She also worked as a lecturer in Indigenous resurgence and colonial fingerprints in the 21st century.

“It was a pretty awesome experience,” Good said.