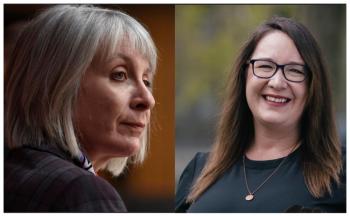 The Ontario Native Women’s Association (OWNA) wants the federal government to use the report the organization released on Oct. 4 as a stepping stone while Ottawa develops a national action plan from the work undertaken by the National Inquiry into Murdered and Missing Indigenous Women and Girls.

“Here is the initial investment to ensure Indigenous women’s safety today while we develop the comprehensive national action plan,” said Cora McGuire-Cyrette, executive director of ONWA. This “is something I’d like to see as we move forward.”

McGuire-Cyrette stressed the need for governments to take action immediately with the second wave of COVID-19 now upon the country. She said violence against Indigenous women—and racism—increased during the first wave and would rise even higher.

McGuire-Cyrette was understanding about the delay the pandemic has caused in working on a national action plan to implement the 231 Calls for Justice delivered by the inquiry’s final report in 2019. But, she said the hope had been that Indigenous women would be a priority during COVID-19.  That hasn’t happened.

“(Joyce Echaquan) has brought the issue of murdered and missing Indigenous women and girls and the connection of systemic racism to the forefront of Canadian society,” said McGuire-Cyrette.

Echaquan died Sept. 28 in the Joliette Hospital in Quebec after seeking treatment for stomach pain.  Tied to a bed and pleading for help, she live-streamed her experience at the hospital on Facebook. She was subjected to racist taunts, called stupid and further humiliated. Two hospital staff were fired and Echaquan’s family is seeking legal remedies.

“She’s reminded everyone that we need to centre Indigenous women that are currently living and experience this violence every single day in these systems,” said Maguire-Cyrette. “Her experience is an unfortunate reality across Canada. This was not an isolated incident. She was targeted because of her race and her gender.”

Maguire-Cyrette said the report takes into account 50 years of what women have said, including discussions with 5,000 women over the past five years.

Heading the 13 recommendations is the safety of Indigenous women.

The recommendations and the actions are all clearly linked and are an indication of what Indigenous women face every day in every aspect of their lives, she said

“We know that racism is not an individual act. It is a systemic act,” she said.

There are no dollar figures attached to ONWA’s recommendations. Maguire-Cyrette said the policy department is looking at both the initial and comprehensive investments needed to implement the recommendations.

“It will be substantial trying to unpack this level of gender-based violence in all communities, not only here in Ontario, but across Canada,” she said.

Health Minister Patty Hajdu who participated in ONWA’s virtual launch of its report on Sunday, said ONWA’s report was “extremely comprehensive, with really, really practical things that can be incorporated in an action plan.” Hajdu added that she was an ally.

She said although a national action plan had not yet been formalized, work was being undertaken to address the issues.

“The ministers responsible are seized with the urgency of it, as I am, and that we aren’t waiting to take action in areas where we do have direct control in terms of our portfolios,” she said.

Maguire-Cyrette announced that ONWA would participate in the federal government’s 11th table, an Indigenous Women’s Working Group, which will be comprised of Indigenous women’s service providers and experts on specific safety issues impacting Indigenous women. They will add their voice to the MMIWG national action plan.