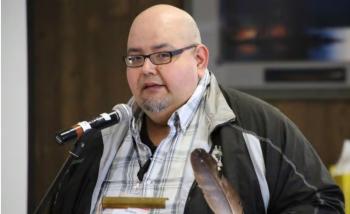 Grand Chief Joel Abram of the Association of Iroquois and Allied Indians.

“…it will be challenging work to begin to understand what’s required to re-establish our own systems and capacities around law-making…” — Grand Chief Joel Abram
By Shari Narine
Local Journalism Initiative Reporter
Windspeaker.com

The federal government has committed just under $1 million over three years to the Association of Iroquois and Allied Indians (AIAI) and Lakehead University’s Bora Laskin Faculty of Law for projects that will build capacity for and implement Indigenous laws and law-making institutions.

“Our connections to the natural world and our balanced relationships with all of Creation still define who we are today and the challenge is to continue to reckon with external systems imposed upon us as we work to restore the means of balance and justice that are inherent to our cultures and our lifeways,” said Joel Abram, grand chief with AIAI, who welcomed the funding announcement on July 21.

AIAI has received funding for its Indigenous law-making research and implementation project.

“While it will be challenging work to begin to understand what’s required to re-establish our own systems and capacities around law-making, it will be critical to re-strengthening the ability of our nations to enact our sovereign authorities and implement the jurisdiction as intended by Creation and for the betterment of our peoples,” said Abram.

The project will be undertaken in two parts. The first phase will see AIAI work with the communities to better the traditional laws and law-making processes of the Lenape, Mohawk, Oneida, and Anishinaabe Nations.

Abram emphasized the need for all work to be directed by their own member nations.

“Our leadership made it clear that the approach to Indigenous law-making must be community-based, nation-based. It’s an undefined process and will require some broad-based dialogue and education that is directed by our member nations,” he said.

Funding was also provided for the “Maamawi Bimosewag—They Walk Together” project, which will lay the foundation for an Indigenous Law and Justice Institute at the Bora Laskin Faculty of Law at Lakehead University.

The project will include three elements: growing relationships and partnering with regional First Nations communities, tribal councils and the Métis Nation of Ontario for the revitalization of Anishinaabe and Métis Law; land-based and partnered learning opportunities for community members and law students, and continuing legal education opportunities for the regional practicing bar and the judiciary; and research to support the project’s revitalization and curriculum development initiatives.

“At the Bora Laskin Faculty of Law we are committed to decolonizing and indigenizing legal education. The Maamawi Bimosewag will support these efforts. It will give all of our students the opportunity to learn about Indigenous law on the land. It will allow us greater scope for research collaboration with Indigenous partner organizations and communities as they revitalize Anishinaabe and Métis law,” said Hughes.

Support for these initiatives align with Canada’s response to the Truth and Reconciliation Commission’s Call to Action 50, which says, “In keeping with the United Nations Declaration on the Rights of Indigenous Peoples, we call upon the federal government, in collaboration with Aboriginal organizations, to fund the establishment of Indigenous law institutes for the development, use, and understanding of Indigenous laws and access to justice in accordance with the unique cultures of Aboriginal peoples in Canada.”

In Budget 2019, Canada responded to the Truth and Reconciliation Commission’s Call to Action 50 by announcing $10 million over five years in support of Indigenous law initiatives across Canada.

“Many of these calls to action relate to our justice system,” said Justice Minister and Attorney General David Lametti. “They speak to the need for fundamental changes to ensure true justice and equity for Indigenous people.” Health Minister Patty Hajdu joined Lametti in announcing the funding.

“These projects are critically important to me personally and I really want to see them move ahead,” said Lametti.

“I’m a committed legal pluralist and I firmly believe that the only way that Canada can live up to the goal of being a just country is by recognizing the plurality and the plural existence of legal systems and interoperative working network of legal systems that allow people to live as they live and have lived since time immemorial,” said Lametti.

He also pointed out that his department was working with Crown-Indigenous Relations, Northern Affairs Canada and Indigenous Services Canada to ensure Call to Action 42 was also realized. That item calls “upon the federal, provincial, and territorial governments to commit to the recognition and implementation of Aboriginal justice systems in a manner consistent with the Treaty and Aboriginal rights of Aboriginal peoples, the Constitution Act, 1982, and the United Nations Declaration on the Rights of Indigenous Peoples, endorsed by Canada in November 2012.”

Lametti said budget 2021 committed $18 million over five years with $4 million committed in ongoing years to revive the Law Commission of Canada, an independent body first created in 1971 to provide advice on law reform to the Canadian government. The commission was closed once, revived and then closed again in 2006.

“This will support, in part, the work to address systemic barriers in the justice system including barriers faced by Indigenous peoples,” he said.