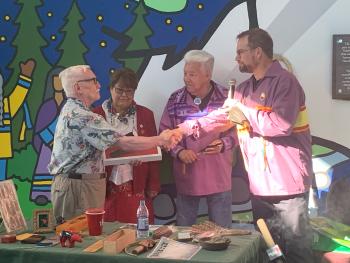 Inuk artist Piita Irniq (left) is welcomed to the Telus World of Science in Edmonton. Photos by Crystal St.Pierre

“I’ve been building inuksuit for the past 40 or 50 years in the Arctic. And to more recently in southern Canada and different parts of the world to make connections for Inuit… to make friends with the rest of the world.” — artist Piita Irniq
By Crystal St.Pierre
Local Journalism Initiative Reporter
Windspeaker.com

Elders and staff at the Telus World of Science in Edmonton officially welcomed artist Piita Irniq through ceremony on May 23.

Irniq, an Inuk Elder from Nunavut, will construct a niungvaliruluk, which is a window-shaped, directional inuksuk meant to point towards a place of significance.

The inuksuk is part of a new exhibit, Arctic Journey, scheduled to officially open at the Telus World of Science in October 2022.

The exhibit will showcase the culture and history of Inuit people.

“We want to engage Canadians, both Canadians from northern Canada and especially Canadians from southern Canada, in meaningful, constructive, thoughtful dialogue and understanding and exploration around the science and knowledge that helps us understand (each other),” said Alan Nursall, president and CEO at the Telus World of Science.

Irniq was born in 1947 at Lyon Inlet near Repulse Bay.

“I was born in an igloo and lived in an igloo for the first 11 years of my life,” he said. At age 11, Irniq was taken to residential school. He said sharing his culture has helped him heal from that.

“You have to go through that route in order to get to the other side,” he said.

During those first 11 years of his life, Irniq said he learned many aspects of Inuit culture from his parents, including fishing, hunting, carving and the significance of an inukshuk.

“We are a hunting society. One language, but many different dialects,” he said. “I was born in an igloo and I hunted and fished for caribou and sea mammals when I was a little boy. I learned much of my Inuit culture from my mother and father.”

Part of sharing his culture has included building inuksuit (plural) all over the world.

“The inuksuk is one of the ways I make friends with the rest of the world for Inuit,” he said.

Originally the rock structure was used in the Arctic as a message from one hunter to another.

A specific characteristic that Irniq includes in his inuksuit is a window at the top where you look through to see a prime hunting location or a path to travel.

“That’s become kind of like my own signature. It’s the kind of inuksuk I build all over the place,” he said.

He has built these structures at museums, education institutions and in high tourist locations.

“My inuksuks are all over the place around the world representing Inuit of the world,” he said.

In 2005 he was part of a veterans’ committee that focused on recognizing the contributions of Indigenous people in Second World War.

“We went to Europe to bring back the war dead in spirit,” he said. “I built an Inuksuk over on Juno Beach, much like I build them, with a window on top… It faces directly from Normandy to Canada. The idea is to bring (them) back in spirit, … so they rest in peace and forever.”

In Edmonton, Irniq’s inuksuk will be built with the intention of teaching culture and history to those who visit the facility.

“What is happening here is to reflect on Inuit culture, Inuit custom at this particular building,” he said, adding the project will take place over the next four or five days.

The first step is to choose the stones for the project and then they must be cemented together. This isn’t something he would do in the Arctic, but said he wants to take the extra time and steps to ensure the structure is safe for all attendees.

“I’m so pleased to build an inuksuk in Edmonton in your territory, to help build a better world for all of us,” he said.

“To help build a better relationship for all of us. Because we need to do that today more so than ever. As Indigenous people we have always been here. We are here today and we are going to be here tomorrow and for many, many thousands of years to come.”