Artist Lori Blondeau making the most of pandemic-era inspiration 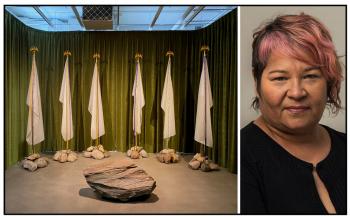 “There’s so many Indigenous people working in the arts. Just talk to people that have been working in the arts and (develop) your artistic practice.” — Lori Blondeau
By Adam Laskaris
Local Journalism Initiative Reporter
Windspeaker.com

“[Politicians] were always in front of these awful green curtains when they were doing their press conferences,” Blondeau said.

So she decided she’d use those drapes as inspiration for the backdrop of her latest piece, Stones from my Kokum’s House, a new art installation hosted at Winnipeg’s Plugin Institute of Contemporary Art.

The work features multiple blank flags and rocks set up in a way that mimics a traditional televised news briefing.

“The piece is affected by being in lockdown in Winnipeg and watching the news,” Blondeau said.

Blondeau, a member of George Gordon First Nation located in Saskatchewan, has had an extensive career in the photography and performance arts realms.

Rocks have been an integral part of much of Blondeau’s work throughout her career, which she says was inspired, in part, by travel as a child.

“I just remember with my parents on road trips we’d go to sacred sites — medicine wheels, rock arts and different effigies,” she said. “My work revolves around these rocks.”

Often coming along for these trips was Blondeau’s older brother, Edward Poitras, a renowned artist in his own right, who was presented the Governor General’s Award for the Visual and Media Arts in 2002, presented by the Canada Council for the Arts in recognition of his life’s work.

So when she was originally approached by Nasrin Himada, a former curator at Plugin ICA, who was interested in submitting a nomination for the award on Blondeau’s behalf, she was hesitant, thinking she might not be worthy of the award.

After letting her name be put forward, Blondeau was floored when she found out she’d been named a recipient herself, some 19 years after her brother’s recognition.

“I was in shock, she said. “I knew I was nominated, but you don’t think about winning.”

Much of Blondeau’s work deals with tackling racism, at the systemic level and on a personal level.

“Racism is really built around stereotypes and I really tried to unpack the stereotypes of Indigenous women,” she said. “I wanted to tackle that idea that you can’t believe everything you see, visually.”

Blondeau’s work is directly influenced by her own life experiences that came with moving around as a child.

“We all know how racist the prairies can be and are,” she said. “Growing up in my family, we left Lebret in 1972 to go to Regina. When I moved to the city it was really bad. There was only a handful of Indigenous families at the school I went to.”

Like many artists, Blondeau’s work has been greatly affected by the pandemic, but she’s grateful for the efforts of the larger arts community to find new ways to adapt and keep the art alive.“Curators came up with interesting ways to support artists,” Blondeau said,” and I think galleries have been great at responding to help artists.”

While performance art is something Blondeau has been known for throughout her career, she said the idea of performing over a Zoom call or a livestream isn’t exactly something she’s interested in, adding that she’s looking to prioritize other forms of artwork.

“As you get older it gets harder on your body,” Blondeau said, noting that she’s going to be shifting the majority of her workload to art installations and exhibiting her photography.

Outside of her work in various exhibitions and galleries worldwide, Blondeau works as an instructor at the University of Manitoba. She said she’s grateful to have an income and position that provides her with opportunities to continue making artwork, and although teaching mostly remote sessions has been challenging, her classes usually make the most of it.

When asked for advice for up-and-coming artists, Blondeau kept it simple: Build up a network and continue to put effort into your work.