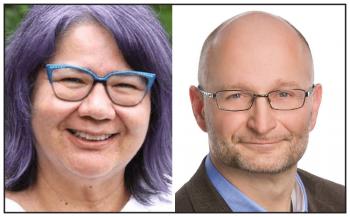 Residential schools were “a crime against humanity and that’s why we’re calling for a special prosecutor. People need to be held accountable. People need to be tried.” — NDP leader Jagmeet Singh
By Shari Narine
Local Journalism Initiative Reporter
Windspeaker.com

Justice Minister David Lametti says that both a special interlocutor appointed by his government and a United Nations special rapporteur requested by the Assembly of First Nations (AFN) can “help chart a path forward” when it comes to the deaths of children and burial sites located at former Indian residential schools.

Lametti’s comments were made following his address to chiefs at the AFN’s virtual Special Chiefs Assembly on Dec. 7.

He reiterated the Liberal government’s commitment to appointing a special interlocutor to support Indigenous people and communities in their efforts to identify and address unmarked, undocumented graves and burial sites associated with residential schools.

The concept for a special interlocutor, said Lametti, came from Indigenous leaders and Indigenous legal experts.

But AFN National Chief RoseAnne Archibald made it clear in an exchange with Lametti during the question period that followed Lametti’s comments that AFN leadership wanted a “truly impartial process.”

In fact, in her address to chiefs earlier in the day, Archibald said, “Canada must be held to account and they have to be responsible for their genocidal laws and policies, and most importantly, Canada must not be allowed to investigate itself.”

In July, the AFN passed two emergency resolutions demanding accountability and justice for the missing and unidentified children of residential schools. They called for an investigation by an international representative or rapporteur into the unmarked graves found at former residential school sites.

Archibald said a human rights complaint will be filed to the UN Office of the High Commissioner for Human Rights “in line with the pursuit of remedies for victims of genocide.”

Lametti said he was aware of the resolution and that acquiring the services of the UN special rapporteur took time.

He added that the federal government’s special interlocutor might help pave the way for the UN special rapporteur to come to Canada, especially if the person appointed by Canada was “someone who had a stature” like Murray Sinclair.  However, Lametti made it clear he was only using Sinclair as an example.

Presently, Sinclair, the former chair for the Truth and Reconciliation Commission on the legacy of Indian residential schools, is working to help broker an out-of-court settlement between the federal government and child welfare advocates on compensation for First Nations children discriminated against by the child welfare system.

“If it’s an Indigenous person of that stature who can move and push and open and pull and support, then I think we get to a better place,” said Lametti.

He said he would like to appoint the special interlocuter as soon as possible but understood the importance of working with First Nations, Métis and Inuit communities to select the right person.

He said he had heard from Indigenous leaders that it was important to appoint someone “who is experienced in facilitating dialogue between Indigenous governments, communities and families and other governments and entities.  We know that the person requires a deep understanding of Indigenous laws and protocols, and of trauma-informed approaches.”

Archibald said while the AFN wasn’t in agreement with a special interlocutor, they were in agreement with the additional records on residential schools the federal government recently announced it would release.

“That’s moving us toward justice for our survivors and those who didn’t make it home,” said Archibald.

Those documents relate to eight residential school “narratives,” Ottawa generated reports on the history of the schools, with statistics and abuse accusation information. They will be sent to the National Centre for Truth and Reconciliation (NCTR) within the next 30 to 45 days, said Miller.

He also committed to an extensive internal review of all documents in Canada’s possession to find any other residential school documents that can be disclosed. However, he said, they could be limited by applicable legislation, ongoing litigation, and court supervisory roles.

“We are looking at it through the lens of closure needed for survivors and the need for answers,” said Miller.

Speaking to chiefs on Wednesday, NDP leader Jagmeet Singh said he did not understand why those records are being released only now.

He also called what happened to Indigenous children at residential school “a crime against humanity and that’s why we’re calling for a special prosecutor. People need to be held accountable. People need to be tried. There needs to be justice and so we’re going to continue to push for that.”

Earlier this week, the NCTR and the Missionary Oblates of Mary Immaculate (OMI) announced further collaboration to grant the NCTR full access to critical residential school records. However, specific and relevant materials to be shared have not been identified.

The Dec. 7 news release states that OMI Lacombe Canada (in Ottawa) and Notre- Dame-du-Cap (in Richelieu, Que.) leadership are working with the Oblate Administration in Rome to find “an appropriate third-party process to clarify if any such documentation resides there and what information it might contain.”

The Kamloops Indian Residential School in Tk’emlúps te Secwépemc First Nation is one of the schools operated by the OMI.

“In these sacred lands Canadians and the world first learned about how 215 innocent children died and were buried in unmarked graves. I stand in support of all survivors, their loved ones, intergenerational trauma survivors, family members and First Nation leaders who have undertaken the painful work of recovering these innocent children,” said Archibald, who participated in the virtual assembly from Tk’emlúps te Secwépemc First Nation.

Those 215 graves were uncovered in May. In June, the Cowessess First Nation uncovered 751 unmarked graves at Marieval Indian Residential School.