Appointment of hereditary chief at Kapawe’no First Nation in dispute 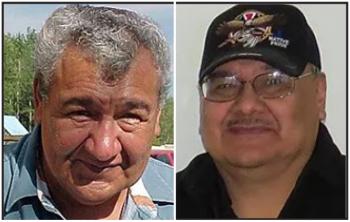 “He’s the son and he was stepping up to the plate, but here’s Sydney still claiming himself as hereditary chief with no paper work to back it up.” —Lydia Cunningham
By Shari Narine
Windspeaker.com Contributor

Kapawe’no First Nation membership wants proof that Sydney L. Halcrow has been appointed as their new hereditary chief and they’re asking for it to be presented to them on Feb. 8.

Halcrow has come under fire after his legal counsel sent a letter to membership three days after hereditary chief Frank T. Halcrow was buried, announcing that Frank had appointed his brother Sydney to the position.

Frank passed away on Jan. 2. The Kapawe’no First Nation website states Sydney was appointed by Frank in October 2019.

At a membership meeting on Jan. 25, Sydney was challenged for the position by one of Frank’s sons, George Halcrow.

“He’s the son and he was stepping up to the plate, but here’s Sydney still claiming himself as hereditary chief with no paper work to back it up,” said Lydia Cunningham, who refers to herself as a “grassroots band member.”

At that meeting Sydney was asked numerous times, including by Cunningham and George, to produce a band council resolution or any signed documentation to prove his appointment. No such documentation was presented.

“How do we know (the letter from legal counsel) wasn’t just written up the day before the meeting?” said Cunningham of the Jan. 25th meeting. She is the niece of both Frank and Sydney.

Cunningham says that according to Kapawe’no hereditary custom, the position of hereditary chief is to be passed down to the chief’s children. Hereditary custom also involves ceremony, and that did not take place with the naming of the new chief.

However, legal counsel Robert Philp, who says he’s been invited to attend the Feb. 8 meeting in order to give advice to the membership, asserts that Kapawe’no’s election code doesn’t specifically state that the position of hereditary chief is passed on to the chief’s children, and this is where the trouble lies in moving forward.

“There are a number of provisions about the hereditary chiefs (but) there’s nothing that I’ve seen that specifically says that (it passes to the children)... My understanding is that is the anticipation of the members,” said Philp. He wouldn’t disclose who his client is. He does confirm that it is not Sydney Halcrow, but would neither deny nor confirm it is George Halcrow.

It may also be the “anticipation of the members” that the position would pass to the eldest son, which George is not. However, Philp says the election code sets out other qualifications that need to be met for the position of hereditary chief.

One of the issues facing Kapawe’no First Nation with its election code, says Philp, is that it’s a relatively new First Nation – formed in the 1970s – and has little experience in a hereditary chief system, unlike in British Columbia, for example, which has “much more experience in the mechanics of the process.”

He adds that “to my knowledge” there is nothing in writing to uphold Sydney’s appointment.

Cunningham says membership has been further blindsided by Sydney’s announcement, because the alleged appointment occurred on Oct. 4, 2019, and there was a membership meeting on Oct. 5.

“The question came up who was the next successor of chief and council and they told membership it was in the works,” said Cunningham, who was at that meeting.

At the time of the Oct. 5 meeting, Frank was hereditary chief, a position he had held since 1970. Sydney and Peter Chalifoux were councillors. Council consists of only the chief and two councillors. Chalifoux retired in November. Now there is only an alleged chief.

Frank had been sick, having had strokes and heart attacks, says Cunningham.

A petition, signed by about 80 of the approximately 260 voting members of the First Nation, is calling for two special membership meetings. The meeting scheduled for Feb. 8 is directing Sydney Halcrow and his administration to “provide … a full, unfettered, candid and complete disclosure and production of any and all evidence relating to the alleged appointment.”

It also calls for Sydney and interim band administrator Delores Flett “to review the certified production and disclosure of all evidence and respond to any questions and further queries” made by the membership.

Philp says he will be offering advice at this meeting based on what has been outlined in the petition.

The special meeting scheduled for Feb. 15 is to involve Indigenous Services Canada. Alberta Branch officials are being asked to “participate in a discussion and evaluation of framework options for leadership selection including the First Nations Elections Act to assist the membership in determining the most appropriate framework for the good governance of the Kapawe'no First Nation.”

Membership is directing Sydney to make no “major” band decisions and for him and Flett to restrict their duties to carrying out programs and delivering services, says Cunningham.

She alleges Sydney has threatened to cut off the delivery of all services and programs to membership and fire band employees if the petition goes through and has also challenged the petition based on its numbers. She says according to Kapawe’no governance rules, decisions are to be made and referendums to be held based on a 50 per cent plus one approval formula. However, she holds that chief and council have made past decisions by using a straight majority head count of those in attendance at meetings.

“My view is that there’s nothing to suggest (the petition) is illegal. If people are governed by any government, if they can’t petition their government then there’s something wrong,’ said Philp.

However, he could not say whether the petition compels Sydney Halcrow to attend either meeting.

Cunningham says there is power in the petition.

“It’s the people who hold the power and chief and council have got to follow through with what the members are saying,” said Cunningham.

After an initial interview with Windspeaker.com, George Halcrow asked to withdraw his comments.

Sydney Halcrow did not respond to repeated requests for an interview.

Indigenous Services Canada did not follow up on an email sent by Windspeaker.com.