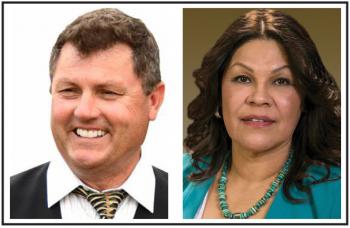 “The province is taking the stand that Crown land belongs to the province so it’s an unsettled issue. We need to talk about.” — Tsuut’ina Chief Lee Crowchild
By Shari Narine
Windspeaker.com Contributor

The first words of advice that Alberta Regional Chief Marlene Poitras is offering to the province’s new Indigenous Relations Minister Rick Wilson are to talk to First Nations.

Wilson was named earlier this week as a member of United Conservative Party Premier Jason Kenney’s new Cabinet. He is among 20 ministers and three associate ministers appointed.

Wilson is a first-time MLA and represents Maskwacis-Wetaskiwin. According to his government biography, “he grew up and went to school with the First Nations of Maskwacîs. He lived near the four bands in the Summer Village of Ma-Me-O Beach, which he considers an integral part of his personal story.”

Wilson is a former County of Wetaskiwin councillor, Wetaskiwin Regional Public Schools board trustee, and chair of the Crossroads Regional Health Authority.

Maskwacîs-Wetaskiwin includes a population of more than 15,000 Indigenous people.

“Like the previous minister, he should make an effort to go out and meet with the First Nations and hear their concerns. To sit, to have that collaborative dialogue, to ensure they have some mutually beneficial agreements or solutions coming out of those discussions,” said Poitras.

On that list of discussion topics needs to be Crown land, she says, pointing to Kenney’s pre-election speculation about selling off Alberta Crown land in the northeastern part of the province. Kenney said the land was not treaty land.

“I would think, in order for him to move on any type of Crown lands, he needs to have those discussions with First Nations directly because despite the Crown lands, the First Nations have treaties, they have title and jurisdiction, so they have to be at the table when those issues are being discussed,” said Poitras.

Crown land was a point raised on May 2 on the final day of the Assembly of First Nation’s policy forum in Edmonton. In a question-and-answer portion with federal Crown-Indigenous Relations Minister Carolyn Bennett, Tsuut’ina Chief Lee Crowchild expressed concern over the province’s view of Crown land.

“The province is taking the stand that Crown land belongs to the province so it’s an unsettled issue. We need to talk about,” said Crowchild.

“I think the issue around Crown land is problematic,” said Bennett. “I think it’s problematic in your province. I think that the signal from your premier is disturbing. It’s not how we see reconciliation.”

“I think that it is, as we get further along the road on resource revenue sharing and all of the things that are about being able to work nation-to-nation, that these are things that we want to work out.”

A number of delegates indicated concerns with their interactions with provinces.

With this Alberta government’s focus on economic development and jobs, the UCP have also talked about creating a Crown corporation to work with Indigenous communities interested in resource projects and has appointed an associate minister in charge of Red Tape Reduction to make it easier for development.

Poitras says such a Crown corporation may prove beneficial for First Nations who are interested in purchasing and operating pipelines and being involved in the energy business in others ways. However, until she knows the specifics of the proposed corporation, she wasn’t willing to endorse it.

“But it’s not just those First Nations, but he’s also got to talk with those other First Nations that don’t have the resources that are directly linked to their communities so they can benefit from it as well,” she said.

Reducing Red Tape is aimed at decreasing regulations and that could be a concern, said Poitras.

“There’s some First Nations, particularly those in the north, that are directly impacted by oilsands development in that region. There’s a duty to consult and they want to have some say in terms of the impact of development within their region and they also want to be involved in it,” she said.

When the UCP sat in opposition, MLA Dave Hanson was the party’s Indigenous Relations critic, a position he also held under the Wildrose Party. The Wildrose and Conservative parties merged in 2017 to form the UCP. Among Hanson’s accomplishments was his work with the Sixties Scoop Survivors that led to the province’s apology in 2018. Hanson was successful in retaining his seat in the April election.