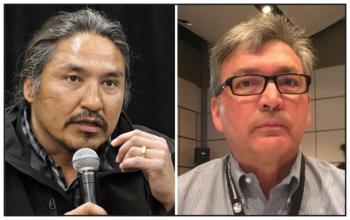 Alberta Justice is in the process of creating an Indigenous advisory group that will lend voice to policing matters, including on peace officers, victims’ services, restorative justice and crime prevention.

“I think it’s a good concept and I support it in principle,” said Cameron Alexis, CEO for Tribal Chiefs Venture Inc. and adviser to Treaty 6 chiefs on police matters, “as long as it’s…not largely created because they’re trying to find full support for their provincial police force organization in Alberta.”

Last October, the UCP government announced it was considering transitioning from the RCMP to an Alberta Provincial Police Service (APPS).

Presently the province contracts the RCMP to deliver policing services on the majority of First Nation communities and all Métis settlements.

Treaty 6 and Treaty 8 nations immediately announced their opposition to a provincial police force.

Treaty 6 said if a provincial police force were created, then Treaty 6 nations would create their own “self-administered police organizations,” said Alexis.

Treaty 8 is “talking about our own police force and are engaged in the process of having this, and both the federal government and Alberta government know what we are up to,” said Athabasca Chipewyan First Nation Chief Allan Adam.

However, Adam also voiced concerns that the advisory group would support a provincial police force.

“The province’s goal is to get their own police force and then they can do whatever they want to do with it,” he said. “I’m not in favour of that.”

Pushing a provincial police force is not the purpose of the Indigenous advisory group, says Marlin Degrand, assistant deputy minister for the public security division of Alberta Justice and Solicitor General.

APPS is being further studied by a team from the ministry, and Degrand says he has passed on concerns voiced by Indigenous leaders.

The report commissioned to study a transition from RCMP to APPS states that consultation had to take place with First Nations and Métis.

“What we’re talking about here is actually the creation of an advisory group that’s going to be able to provide myself and staff within the public security division with advice and wisdom around the many public policy matters that we’re involved in everyday in our role of providing for and ensuring security for all Albertans everywhere and overseeing the police in the province,” said Degrand.

Should APPS become reality, then the Indigenous group would provide advice to the public security division on that subject as well, he said.

Alexis wasn’t aware of the advisory group until Justice Minister and Solicitor General Tyler Shandro made the announcement earlier this week. Alexis called out the government for lack of consultation and engagement.

Adam wasn’t aware until he was contacted by Windspeaker.com.

While conversations about creating such an advisory body were held with some Indigenous nations, Degrand admits it wasn’t feasible to reach out to all 48 First Nations and eight Métis settlements.

For that reason, he says, he is aware the group will “evolve” as feedback is received from Indigenous governments and organizations across the province.

“We have to start somewhere so we’re starting with sort of an open call, very consistent with the approach of agencies, groups and commissions in the province. Knowing full well that we won’t get this right the first time, but we will be relying on the wisdom of those involved that we work with to help us refine it,” said Degrand.

The concept of an advisory group came about after another controversial move by the Alberta government.

Treaty 6 and Treaty 8 nations were vocal in their opposition of a move that would give peace officers in the Alberta Sheriffs, including Fish and Wildlife Enforcement Services and the Sheriff Highway Patrol, additional responsibility and authority on First Nations’ lands.

As far as Degrand knows, RAPID is presently only being deployed in two Indigenous communities as dialogue continues with the rest.

Conversations with Indigenous groups about RAPID and amending the Police Act were the genesis of the Indigenous advisory group.

“We received across the board a lot of support from participants at those conversations,” said Jessica Thomson, director of community engagement and strategy with the department of Justice and Solicitor General.

The position profile posted on the Alberta Public Agencies website calls for applications by May 18, with 12 positions to be filled for three-year terms.

“We are looking for perspectives that reflect the diversity across the province,” said Thomson.

The call is for representation from First Nations, Métis and Inuit; urban, northern and on-reserve people; and a variety in age, gender and sexual minorities.

People would put their own names forward, says Thomson, and could get letters of support from Indigenous organizations.

Degrand, however, is also hoping that organizations will “actively” support people who can represent them.

Degrand says there is the possibility that advice from the group may contradict what chiefs and councils have to say.

“I’m not concerned that could happen, but I’m very alive to the fact that it could happen and obviously we’ll be very careful to ensure we have a balance as we move forward,” he said.

No decision has been made yet as to whether the quarterly meetings or portions of the meetings will be public. That decision will be made by the group, says Thomson.

Advice can range from short term to long term strategy and may be limited by legislation or budgetary restrictions.

There is no specific funding available to action the advice, says Degrand, but the public security division does have programs that involve funding, and money may be reassigned or repurposed. As well, requests for additional funding for new initiatives can be made to the Treasury Board through the ministry.

Like any advisory board, the government is not required to act on the advice.

“We would never categorically dismiss the advice otherwise there would be zero point in actually creating this forum which is, of course, of incredible importance to me,” said Degrand.

Alexis says there’s an “extreme possibility” that the government could use the advisory group as a replacement for consultation with Indigenous communities.

Degrand says that will not happen.

“It truly doesn’t negate any of the other tables for or engagement sessions that we are and must be involved in as a government,” he said.

Thomson sees the advisory board as a step toward reconciliation.

“The phrase that has been said to me numerous times is that communities are tired of us coming to them at the end of something being sought out and trying to get validation at the end. They want to be involved in the early thinking and that's what I'm so proud about.

“In terms of this initiative…we're trying to build in space at the beginning so that they have a voice throughout the consideration and not just at the end,” said Thomson.

In a government news release, Woodland Cree First Nation Chief Isaac Laboucan-Avirom said the advisory group is a “good step in the right direction in recognizing our right to self-determination and to make and move towards our own destiny.”

Alexis and Adam aren’t quite as sold.

“I hope that it’s not just a political maneuver. I hope it’s actually going to have some substance to it where there will be proper process and engagement,” said Alexis.

“If it’s a working group to take over the justice system to continue to plague our people then I’m not in favour of it,” said Adam.