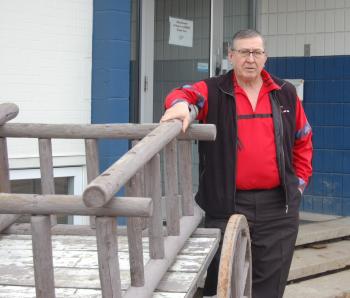 Child and Youth Advocate Del Graff takes particular pleasure in a new proposal that would see a child capable of forming an opinion have their opinion solicited when considering placing that child outside their family.
By Shari Narine

Donald Langford is tired of “spin” and as far as he is concerned that’s exactly what the Alberta government is doing when it talks about changing the future for Indigenous children.

On Oct. 31, Children’s Service’s Minister Danielle Larivee introduced Bill 22, An Act for Strong Families Building Stronger Communities, which is the first phase of a three-phase plan to improve the child intervention system and reduce the number of Indigenous children in care. Indigenous children represent 61 per cent of those in provincial care.

“My frustration with this plan is that it doesn’t say anything about putting families back together,” said Langford, who has served as executive director with Metis Child and Family Services for the past 20 years.

Langford was critical of the ministerial panel that was struck by Larivee’s NDP predecessor in 2017 – lack of Indigenous representation and the strong possibility of one more report to sit on a shelf – and that criticism continues.

He says Bill 22, which amends the Child, Youth and Family Enhancement Act, doesn’t do enough and doesn’t offer anything new.

In fact, one of the aspects of the bill that Larivee considers “tremendously important” speaks to Langford’s concerns.

In talking about the bill before she introduced it in the Legislature Wednesday afternoon, Larivee said making “Indigenous involvement a fundamental component of the system” was necessary. That includes notifying First Nation bands when their children are the subject of private guardianship applications so they can be part of the court process.

Langford points out that in early 2000, the Conservatives set the Aboriginal community as one of four pillars or service-target areas for Child and Family Services, with the intent that the Indigenous community would be involved in the development, delivery and management of all programs affecting their children. It was abandoned because of the price tag associated with it, he says.

At this point, said Larivee, no additional funding is needed to bring about the changes proposed in Bill 22.

Langford is also concerned that having bands involved in court proceedings means Indigenous children have been removed from their homes.  He doesn’t want the children taken away even if Bill 22 ensures that Indigenous children retain their connections with their culture and communities or that the money follows the child from one caregiver to the next.

He wants money put into the families, so parents receive help, which in many cases, is to get out of poverty. And if children are taken away, he wants the parents to receive the help they need so their children can be returned. He says he doesn’t see that in this bill.

“They haven’t put the effort into working with the family. What they need is family-based services,” said Langford. “To build a family, you have to work with the whole family. You need a family service plan.”

Also missing from the bill, he says, is the urban Aboriginal community, which has unique needs and limited resources.

“That’s where the problems are. That’s where they’re scooping all the kids,” he said, pointing out that the children his agency works with are children from Edmonton. The city is home to 76,000 Indigenous people.

According to Statistics Canada 2016 census, the province has an Indigenous population of close to 260,000, with Metis accounting for 42 per cent of that figure. For First Nations, 56 per cent live off-reserve.

Child and Youth Advocate Del Graff shares Langford’s concerns but also says he has a sense of optimism, although it is too soon to know what the legislation will look like once rolled out.

“I am encouraged that this is being moved forward as a legislative enhancement to the Child, Youth and Family Enhancement Act, that it’s not just a policy change,” he said. “But while I’m encouraged … there’s always challenges around the implementation of this level of change.”

He notes that he hasn’t seen any details yet as to how the changes will be implemented so that children and their families will experience “the full force of these shifts.” The legislation is to be enacted Feb. 28, 2019.

Graff is pleased the bill has a new focus on safety — mental, emotional spiritual and physical — for children. Safety has been set as one of the overarching aspects in the new bill and safety has always been at the forefront of the investigate reviews undertaken by his office.

Had the measures being proposed now been in place for these young people, it may have made a difference.

As the child and youth advocate, Graff takes particular pleasure in a new proposal that would see a child capable of forming an opinion have their opinion solicited when considering placing that child outside their family. That is one of 13 “matters to be considered” by caseworkers and courts in every case.

“I really hope (discussion with First Nations) continues. That to me is a critical ingredient for what comes next,” he said.

It’s a sentiment shared by Assembly of First Nations Alberta Regional Chief Marlene Poitras, who said in a statement issued Wednesday, “Co-development of the legislation should have been on the table in this process and I am anxious to see what subsequent phases hold for direct involvement of our Chiefs and leadership.”

Poitras also stated it was the first time the bill, which could impact First Nations rights, had been seen by First Nations in its entirety.

Phases two and three for changes to improve the child intervention system aren’t scheduled to be in play until fall 2019 and then 2021 – both following the provincial election in spring 2019.

Graff says there needs to be “a consistent path forward for the benefit of the young people of this province and their families in vulnerable circumstances. The fact that we did have an all-party panel that looked at many of these issues, is, I think something that helps in that regard, regardless of what happens with the election.”

Larivee said she would be meeting with Indigenous Services Canada Minister Jane Philpott on Friday and Bill 22 would be part of the discussion.