Alberta ‘white cards’ for tax exemptions on reserve to be discontinued 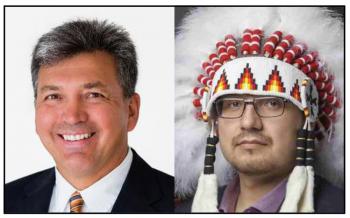 “From an Indigenous perspective, when these cards came into place, they put limits on purchasing tobacco and fuel, because I think back then the province saw it as an unfair advantage to Indigenous businesses, when we really took it as our Treaty rights over resources that ultimately belonged to us as Treaty people.” — Enoch Cree Nation Chief Billy Morin
By Shari Narine
Windspeaker.com Contributor

The Alberta government has given notice to First Nations that they will soon no longer have the Alberta Indian Tax Exemption (AITE) card—commonly referred to as the “white card” —to get fuel, tobacco and accommodation tax exemptions on reserve.

“This white card has been long overdue to be discontinued. The (federal) Indian status card should be the only card recognized for tax exemption in this province, let alone this country,” said Cameron Alexis, interim executive director for the Confederacy of Treaty Six First Nations.

The Confederacy received a letter March 26 from the Alberta Treasury Board and Finance informing them that the decision had been made to discontinue the AITE. The decision was part of Premier Jason Kenney’s commitment to reduce red tape. In 2019, when the United Conservative Party (UCP) was elected, Kenney created a Red Tape Reduction initiative as a means to streamline government and save money.

“We heard from First Nations in Alberta that the requirement for a dedicated provincial card to provide tax exemptions for eligible purchases of tobacco and fuel was an unnecessary duplication,” reads the letter signed by Finance Minister Travis Toews, associate minister of Red Tape Reduction Grant Hunter, and Indigenous Relations Minister Rick Wilson.

The letter goes on to say that retailers are expected to implement the change and accept the federal Certificate of Indian Status card in place of the AITE by June 2021, although that implementation deadline is dependent on “technical details.”

“The Government of Alberta is working closely with Indigenous Services Canada and point of sales retailers to support the transition,” reads the letter.

“(The AITE) adds an extra layer of bureaucracy and headache for our Indigenous people so I’m really actually thankful (Wilson) followed through with getting rid of that,” said Morin.

The AITE was brought in by the Conservative government. Morin believes that was in the 1990s, but Alexis thinks it was in the 1980s. Windspeaker.com requested background information on the AITE from both the Finance and Indigenous Relations ministry but received nothing.

“The Alberta government have never recognized the Treaty card before for tax exemption, so they came up with this innovative idea that ‘we’ll provide this white card to the status Indians for tax exemption’…. This was their answer,” said Alexis.

“From an Indigenous perspective, when these cards came into place, they put limits on purchasing tobacco and fuel, because I think back then the province saw it as an unfair advantage to Indigenous businesses, when we really took it as our Treaty rights over resources that ultimately belonged to us as Treaty people. For us again it was fighting the regulatory regime of, I would say, ultimately, putting First Nations at a disadvantage when it comes to Treaty rights,” said Morin.

Doing away with the AITE is “just one step,” says Alexis.

If that is the next step, he says education of off-reserve retailers and the general public will be required.

“Definitely you are going to have some situations where Albertans, businesses, are not going to understand the process anymore and there definitely needs to be an educational piece to all of this directed to businesses as well as Albertans, because there’s going to be an issue here,” said Alexis.