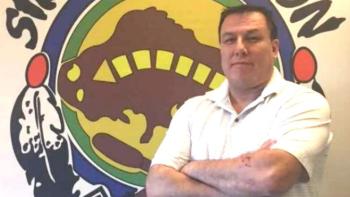 “I’m not going to get too political on this because when it comes to saving peoples lives, I’m here. I’ve put all differences aside and trying to find a solution to help save lives.” —Buck Breaker
By Shari Narine
Local Journalism Initiative Reporter
Windspeaker.com

“My background is addictions. I survived a life of addictions. Being on this Red Road, I have an insight that most of our people feel because I’ve been in those dark places,” said Siksika Councillor Reuben (Buck) Breaker.

He has been sober for 10 years.

Breaker is deeply committed to making a difference in the lives of his people and other Indigenous people who suffer from addictions or homelessness in the city of Calgary.

He is one of two First Nations representatives – the other is Jodi Two Guns, executive director of social development with Tsuut’ina Nation—appointed last week to a Calgary Public Safety and Community Response Task Force whose membership is heavy on Cabinet ministers and city officials.

A similar task force was announced for Edmonton as well last week.

Breaker isn’t sure how nimble the task force will be considering the make-up of a group that is set to address issues that involve Indigenous people in a disproportionate manner.

“When we talk about, ‘Do we have enough people at the table in terms of providing cultural knowledge and whatnot?’, it’s clear that there isn’t at that table,” said Breaker.

And that means Breaker and Two Guns will be spending significant time educating about what “culturally appropriate” services and treatment look like.

The ministers in the task force “regularly receive input from Minister Wilson on the unique challenges Indigenous communities are facing, including around mental health, addiction, public safety and homelessness. They will continue to work with his office as the task forces move forward,” explained spokesperson Colin Aitchison for the minister of Mental Health and Addiction in an email statement to Windspeaker.com.

Aitchison noted that each task force had two Indigenous representatives and “we are committed to working with Indigenous communities as we build a full continuum of mental health and addiction care that incorporates the cultural and spiritual traditions of Indigenous peoples.”

Breaker is clear that there is no pan-Indigenous approach and there are different traditions and cultures to be considered.

“There’s only two First Nations representatives here (and), mind you, we’ll speak for all, but we have to be considerate. If there’s a Cree Elder that needs to be brought in or a Stoney Elder or a Tsuuti’na Elder, that has to be understood,” he said.

Siksika, Tsuut’ina and Stoney Nakoda Nations are closest to Calgary. Indigenous people in the city also include Cree and Métis, and other Nations, he points out.

Breaker also has concerns about potential legislation from the province that could force people with addictions into treatment.

On Friday, Nicholas Milliken, minister of mental health and addiction, confirmed that such legislation “along this topic” could be part of the recommendations he brings forward.

Milliken also said correctional units could be transformed into treatment centres, and that health and police hubs could also be created. He said details “haven’t quite been built out yet.”

Breaker isn’t confident that forced addictions treatment will have a lasting effect.

“Some (people) have changed their lives around, but for the most part, somebody who is caught up in that dark lifestyle, that toxic cycle, if they’re forced to do something, there’s going to be automatic resistance,” he said.

Breaker is also concerned with the timeframe set out by the terms of reference of the task force. It’s to meet monthly from December 2022 to March 2023.

“I questioned that,” said Breaker, who attended his first meeting on Dec. 16, just after the Calgary task force was initially announced.

“How much do you think we’ll actually get done (in that time)? To me it’s not enough.”

“I’m not going to get too political on this because when it comes to saving peoples lives, I’m here. I’ve put all differences aside and trying to find a solution to help save lives. Whether it’s lip service on anybody’s part, I can only speak on myself. I’m going to make sure there’s action after every meeting,” he said.

Breaker would like to see subcommittees established that can do the “groundwork” set out by the task force. He says both he and Two Guns have connections to community groups that can contribute to the work undertaken by the task force.

Other ministers joining Schulz and Milliken on both the Calgary and Edmonton task forces are Jeremy Nixon (Seniors, Community and Social Services) and Mike Ellis (Public Safety and Emergency Services).

Each task force also has a non-profit representative. In Calgary, that position is held by Patricia Jones, chief executive officer of the Calgary Homeless Foundation, and in Edmonton by Susan McGee, CEO of Homeward Trust.

The task forces will weigh in on implementation of a $187-million commitment to address addiction and homelessness in Alberta's urban centres.

In Calgary, nearly $58 million of this funding will go directly toward addressing addiction and homelessness in Alberta’s largest city. This is in addition to more than $73 million in funding for Calgary shelter spaces and other housing supports this year, and the nearly $10 million already allocated to further increase access to addiction treatment beyond the 8,000 spaces initiative.

In Edmonton, $63 million will go toward increasing access to addiction services and supports over the next two years, and $19 million has been allocated to combat homelessness.