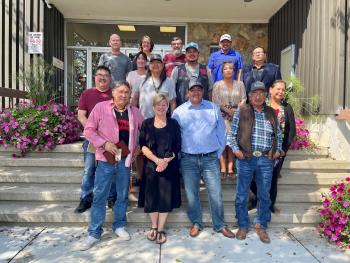 “I think it’s time we try and unite the three nations and the town of Rocky to try and fight this racism that’s been going on in the past 50 years or more.” — O’Chiese First Nation Chief Douglas Beaverbones
By Shari Narine
Local Journalism Initiative Reporter
Windspeaker.com

“I’m still trying to find a way to meet with him,” said Beaverbones about Shandro.

High on his agenda is the behaviour his members face when they encounter health professionals. Similar concerns have been raised by members of Sunchild and Big Horn First Nations.

Strawberry posted on social media two encounters he had in quick succession earlier this month.

On July 4, he flagged down Lakeside EMS on the road to help his mother, sitting beside him in his car and unconscious. But the EMS paramedics turned him down, saying they were “out of service.” Later at the hospital, a security guard challenged his sobriety and accused him of bringing in drugs.

Beaverbones is quick to point out that this sort of behaviour in the health sector against First Nations has been happening for decades.

It’s become a regular occurrence, said Beaverbones, for people of his Nation to expect such encounters and to record them.

“If I was in Sonny’s shoes, I’d do the same thing. I’m glad that he did, to show the people what we go through as nations. He wanted to show what we’re facing. What we’re facing with the ambulance service and security in Rocky. We face that daily,” said Beaverbones.

Lakeside EMS is contracted to work on the three nations in the region. Beaverbones says that will be revisited.

“I believe we will replace Lakeside. We’re trying to have our own people train up for medical and ambulance,” he said.

“After what happened with one of our members, we decided to take action on this. Enough with this racism in our area, our communities and the county,” he said.

Beaverbones invited Sunchild First Nation Chief Jonathan Frencheater to join him in a meeting with Rocky Mountain House Mayor Tammy Burke and council. They discussed the attitudes that frequently face First Nation members at local businesses and by health services. Together they called on a meeting with Shandro and Alberta Health Services.

Now Big Horn First Nation has joined the other two First Nations and the town in forming an anti-racism task force. Details will be worked out at the next meeting.

“I think it’s time we try and unite the three nations and the town of Rocky to try and fight this racism that’s been going on in the past 50 years or more. It’s time that we worked together on all this racism and try to work together as one big community,” said Beaverbones.

He lauds the support they have received from Burke and her council, pointing to the Treaty 6 flag that was hung at the town centre on June 21.

“The town mayor of Rocky seems really supportive with our nations in the surrounding area,” he said.

“We understand we will not be able to move our community forward as long as our Indigenous residents and neighbours are discriminated against,” said Burke in a statement.

Assembly of First Nations Alberta Regional Chief Marlene Poitras is also calling on a meeting with Shandro to discuss working towards “positive healthcare reform for First Nations in Alberta,” read a news release issued by her office.

Steve Buick, with Shandro's office, said Beaverbones has been invited to attend a meeting with the minister on July 22 and he has accepted.