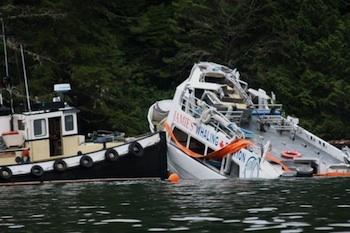 The people of Ahousaht First Nation and the District of Tofino were presented with British Columbia’s newest honor, the Medal of Good Citizenship. Premier Christy Clark traveled to Lone Cone Hostel and Campground on Meares Island to make the presentation to Ahousaht.

The Medal of Good Citizenship recognizes individuals who, through exceptional long-term service, have made outstanding contributions to their communities without expectation of remuneration or reward.

The medal reflects their generosity, service, acts of selflessness and contributions to community life.

The medal is for the selfless dedication demonstrated in October 2015, when coming to the assistance of the families and victims of the sinking of the Leviathan II in Tofino.

The people of Ahousaht were recognized for their brave assistance of victims during the incident. After Clarence Smith and deckhand Kenny Brown spotted an emergency flare while out on the water, without delay they set their boat's course in the direction of the distress signal. Their immediate reaction and further support from Ahousaht members who arrived on the scene with a number of boats to assist undoubtedly saved numerous lives, reads a press statement.

“I'm proud to accept this medal on behalf of our Ahousaht members,” said Chief Councillor Greg Louie. “I'm pleased the Government of B.C. recognizes our community's response to this tragic event, as we work together through the process of improving emergency response across our territory.”

The District of Tofino is being recognized for the manner in which the community banded together to help the survivors and their families, the victims' families and all those involved in the rescue and recovery effort.

The two communities are the first communities to ever receive the Medal of Good Citizenship.

"The Leviathan II incident was a sudden tragedy that deeply affected everyone involved, and shocked the entire community of Tofino,” said acting Mayor of Tofino Greg Blanchette. My fellow citizens rose to the occasion with compassion, dignity and effectiveness, and I am very proud to accept this award on their behalf."

Communities reveal a lot about themselves during a tragedy, said Premier Clark, and this is especially true for the Ahousaht First Nation and Tofino.

“When the Leviathan II went down they rallied together to help save lives, and put themselves at risk not for any other reason than it was the right thing to do. It is my pleasure to honor both these communities with the Medal of Good Citizenship for their extraordinary selflessness and courage."