After connecting with her home, Splatsin member wants to help others 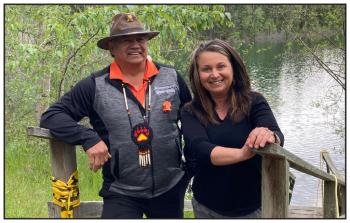 “I always say the best thing we can do right now is shift the narrative to make sure that the problems we have today don’t follow us into tomorrow.” — Charlene SanJenko
By Shari Narine
Local Journalism Initiative Reporter
Windspeaker.com

There was so much that Charlene SanJenko didn’t know when she was 11 years old.

First, that Splatsin First Nation Kukpi7 Wayne Christian “was literally walking for me”.

Over the Thanksgiving weekend in 1980 Christian led the Indian Child Caravan from Prince George to Vancouver where a rally was held to bring awareness to the high number of children who were taken from the community to be raised elsewhere. Splatsin created a bylaw that would challenge the practice.

Second, that she was one of those children. She was five years old when she was placed in foster care off the Splatsin First Nation. SanJenko now 52, knew she was Indigenous, but never experienced her culture.

Third, that when she connected with her First Nation community, Christian would be an integral part of helping her move forward.

The pair is working on a new program. For SanJenko, it’s personal. For Christian, it’s a continuation of his healing work for families. He believes families can heal in three generations, says SanJenko.

The program will be in two parts. Coming Home is a documentary on the life of and work undertaken by Christian. “Our Nation Heals” is the accompanying program that will bring people together in discovery, rediscovery and healing.

Right now, SanJenko, who describes herself as an “Indigenous impact producer, storyteller and media visionary,” is using her skills to bring the project to life. It is one of nine projects her newly-launched company reGEN Media has received corporate backing to undertake.

Being a media visionary, she says, means using media to “make the world a better place.” She makes this happen by generating money from corporations who “want to use their advertising dollars differently” and from investors who are looking to diversify their investment portfolios in an unconventional way and “are willing to look at the power of storytelling in terms of helping us to shift the narrative.”

“I always say the best thing we can do right now is shift the narrative to make sure that the problems we have today don’t follow us into tomorrow,” said SanJenko.

When “Our Nation Heals” kicks of this fall in Splatsin, the Coming Home documentary will not yet be completed. SanJenko expects it will take another 12 to 18 months. However, there will be a “very short teaser” of the documentary this fall.

The format for “Our Nation Heals” is simple. People gather for a meal, view the documentary teaser, and then participate in a short circle session.

The intention is to draw First Nations people from outside of the Splatsin community and connect them with people from Splatsin for six virtual circles, which would be co-facilitated by Christian and SanJenko. The final event will be a community performance and dialogue that will be livestreamed.

SanJenko would like to see “Our Nation Heals” create “a shift” in the participants.

“Can we help them shift to a hopeful place where they’re excited to take a small step towards something mental, emotional, physical or spiritual?” she said.

“For me, the shift is always hope-based…I have a saying that ‘Healing happens in the presence of hope.’ I think that’s a missing piece right now.”

Community resources from partner organizations will be available if people need “bridge programming” after completing “Our Nation Heals,” adds SanJenko.

SanJenko says as she walks alongside Splastin members, she continues to learn. It took her six years to get to this point, including three years of research to “put all the pieces together.”

“Really, the reconnecting with the community is happening right now. I'm living it and breathing it right now. The healing part of this program, ‘Our Nation Heals,’ is another really big step for me,” she said. “I'm going to actively be supporting a program in the community in the best way possible that I can. It's been a very slow and steady process for me.”