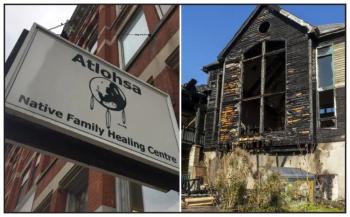 “This was a secured location for community members in need, and we are left with very few alternatives.” — Andrea Jibb, director of Community Planning at Atlohsa.
By Colin Graf
Local Journalism Initiative Reporter
Windspeaker.com

The leader of a service agency in London, Ont. is holding out hope of finding a new location this winter for the creation of an Indigenous-led homeless shelter.

On Nov. 7, fire damaged the clubhouse at a closed golf course that was to be the centre of the proposed shelter project.  A city of London employee has been charged with arson.  Various media reports say the man owned a home for sale near the course at the city's south-east edge.

“This is the time for the community to come together and make a commitment” to London’s Indigenous population, said Raymond Deleary, executive director of Atlohsa Family Healing Services, in a radio interview Wednesday. He is hoping partners will come forward to offer another space in the spirit of reconciliation.

Atlohsa is calling for “immediate investments by the City of London into Indigenous spaces for people experiencing homelessness,” with the “urgent need for land to be returned back to the hands of Indigenous peoples,” as stated in a recent news release.

The City of London Housing Stability Services department has been working “quickly and creatively” with Atlohsa to find answers and a way to “propel an Indigenous-led winter response (to homelessness) forward in London,” according to the same release.

The fire occurred only two days after plans for the shelter were announced. Trailers meant to serve as temporary housing were arriving at the site when a fire, deliberately set according to police, did approximately $1 million damage to the former club house.

The centre was expected to house up to 30 residents during the coming winter, establishing a sense of community with land-based activities on the former golf course grounds.

“Exercising our rights to land” was “a pillar” of Atlohsa’s plan to help those who were planning to live there, said Deleary.

Organizers were hoping to erect tipis or wigwams, invite traditional healers in, and even hold winter sweats. The clubhouse had a large meeting room considered suitable as a community gathering space, and the location “had all the qualities the community was looking for,” he explained.

With a local river at the site, fishing for pickerel next spring would have been possible too, Deleary said.  Atlohsa doesn’t expect to use the location ever now.

“It’s clearly the case someone doesn’t want us in this space,” Deleary added.

“As Indigenous people, we are unfortunately all too familiar with acts of violence towards us.”

Indigenous people make up at least 29 per cent of people experiencing homelessness in London, while they are only about two per cent of the city’s population, according to Atlohsa.

“This was a secured location for community members in need, and we are left with very few alternatives,” says Andrea Jibb, director of Community Planning at Atlohsa.

“We’d like to put a call out to the community for support in our efforts to find a suitable and safe location that meets our needs to support land-based healing for Indigenous people experiencing homelessness.”