AFN youth in tears over dark future, but new minister promises some light 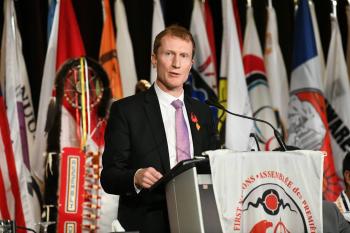 “We owe it to ourselves and to each other to keep working on this relationship with a true spirit of cooperation, always mindful that this cannot be achieved without speaking the truth.” —Indigenous Services Canada Minister Marc Miller
By Shari Narine
Windspeaker.com Contributor

New Indigenous Services Canada Minister Marc Miller underscored his commitment to work with First Nations in partnership on a variety of issues by giving his support to a national youth suicide strategy.

“I will pledge to you today to support that strategy. You have the government of Canada’s support. We will help to implement a distinctions-based policy,” said the minister.

“There are policies out there in place in support from our government and we will be there to  support suicide strategies as they apply to Indigenous youth, as well as in partnership with communities and with the solutions that you propose,” said Miller.

Miller addressed chiefs at the Assembly of First Nations’ Special Chiefs Assembly on Dec. 3 in Ottawa. His presentation came hours after delegates for the Youth Council stood before chiefs and cried while they spoke about the “very dark” future the youth are facing.

Miller’s 15-minute presentation—which he began by speaking Mohawk— seemed to strike all the right notes, earning applause in some places.

Miller committed to be personally involved in finding a “comprehensive, fair, and equitable resolution” for families and children impacted by the on-reserve child welfare system.

“I want to reiterate that we never questioned whether Indigenous families and children who have been discriminated against for decades were due compensation. They are. There’s no question,” said Miller.

“We will find a solution that effectively compensates all victims and their families. We will find that solution by working together in a true spirit of collaboration and nation-to-nation partnership.”

Compensation for First Nations children and their families came to the forefront during the election campaign as the Trudeau government took a decision to seek a judicial review of the Canadian Human Rights Tribunal decision. In November, however, the Federal Court refused the government’s request for a delay in meeting with the parties to work out a compensation plan. The government has until Jan. 29, 2020 to report back to the CHRT on the discussions.

Miller highlighted the work undertaken by his predecessors, which included handing jurisdiction for the child welfare system over to First Nations communities; First Nations taking charge of their education systems and increased per pupil funding; funding for language education; community-led health and wellness initiatives; and 10-year sustainable and predictable funding for First Nations.

Miller pledged to continue to bring down the number of boil water advisories for reserves, while working for long-term solutions for water and wastewater infrastructure; increase the number of adequate and affordable housing; and challenged other government departments to up their Indigenous business procurement figure to five per cent.

“We have a lot we promised and a lot we need to deliver but we will also be listening and continuing to meet with you. Canada must, and I will, take responsibility for years of inaction and we must do it in a way that allows self-determination,” said Miller.

“We owe it to ourselves and to each other to keep working on this relationship with a true spirit of cooperation, always mindful that this cannot be achieved without speaking the truth.”

Miller was invited to numerous First Nations communities, from Alberta through to Ontario, as chiefs stood to address him on such issues as resource revenue sharing, water infrastructure and flooding emergencies.

One theme that emerged was the difficulty First Nations had in dealing with department personnel.

Mukowekwan First Nation Chief Reg Bellerose told Miller to “throw (the department briefings) in the garbage. Listen to what the chiefs have to say today and hear what we’re saying.”

David Monias, chief of the Nation at Pimicikamak Okimawin, said he wanted to meet with Miller instead of the technicians and bureaucrats.

Miller took responsibility for any difficulty with his staff although he stressed that he trusted his officials. He also pledged to visit as many communities as he could, noting that there would be limitations since the Liberals won a minority government. However, he also pointed out the advantage of such a government.

“Being a minority government provides some opportunities, particularly when it comes to Indigenous peoples given that a number of platforms are very well aligned, so there’s a lot of hope,” said Miller.

Indigenous issues, such as the implementation of the United Nations Declaration on the Rights of Indigenous Peoples, abiding by the CHRT ruling and orders, and fighting climate change, were prominent issues for the NDP and the Greens in the federal election. For the Liberals to remain in power they need to form working relationships with the other parties.