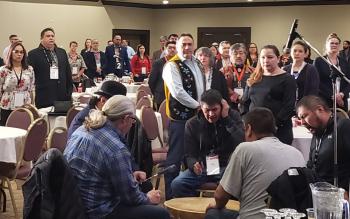 The Assembly of First Nations Four Policies and Nation Building Forum in Edmonton began with song, but descended into chaos on the first day. (Photo: AFN)

"Who are we addressing on this matter? I’m not sure where’s it going. Information is being shared at the mic, presentations and what’s the purpose? And how will the info be used in the presentations?” —Kyle Lamothe, proxy for the Dene Regional Chief Norman Yakeleya
By Shari Narine
Windspeaker.com Contributor
EDMONTON

It was a chaotic beginning to the first day of a two-day policy forum hosted by the Assembly of First Nations in Edmonton on May 1.

The underlying message of those in attendance at the AFN’s Four Policies and Nation Building Forum was put succinctly by Tsuut’ina Chief Lee Crowchild. Chiefs, he said, were “not going to let treaty be compromised.”

The 300 grassroots people, who marched outside the forum’s location, and the chiefs inside made it clear they were not going to allow the federal government to unilaterally implement changes that would undermine Indigenous inherent and treaty rights.

The marchers tried to attend the forum, but were first blocked from the meeting room by security. Eventually, they were allowed in.

“The AFN’s assembly … is supposed to be the people’s assembly.  We can’t ever bar our people,” said Neskonlith First Nation Chief Judy Wilson.

“Whoever made that decision finally not to bar our people out, thank you. Because once you start barring your own people out from your own institutions, then we’re continuing that divide. The only unity that is going to come is if we listen to each other,” she said.

Crowchild, however, was not as accepting. He described the occurrence outside the meeting room as “chaos” and said marchers had not respected the role of chiefs. He asked those who were still in the meeting to leave, because “a place of sacredness” had been created in the room with the pipe, tobacco and smudge that morning.

“We’ve been through the storm this morning. Now we need to restore order,” he said after the lunch break.

However, order was hard to come by as many chiefs and their proxies questioned the purpose of the forum.

On the table for “dialogue” were policies on additions to reserve, comprehensive land claims, specific claims, and treaty rights and inherent rights, title and jurisdiction.

Members of the AFN’s technical team for the Committee on Lands, Territories and Resources provided updates, saying it was National Chief Perry Bellegarde’s intention to create tables to set terms of reference and processes on these subjects.

It was abundantly clear that over the past two decades, government-commissioned discussions, reports, and papers had been written directing change in all four policies areas, but still the federal government – whether Conservative or Liberal – wasn’t interested in allowing First Nations to lead the process in making the changes.

“When I think about what was discussed this morning and the last few conferences that I attended, it feels like I’ve gone full circle in some of the agenda items we’ve talked about … going back to my time in leadership,” said Leroy Wolf Collar, who served as chief of Siksika Nation in 2010.

“It concerns me, like, we continue to spin our wheels, continue to react to government policies whether it’s federal or provincial.”

Other chiefs wondered where the limited dialogue was going to lead them.

“Regards to the process… who are we addressing on this matter? I’m not sure where’s it going. Information is being shared at the mic, presentations and what’s the purpose? And how will the info be used in the presentations?” asked Kyle Lamothe, proxy for the Dene Regional Chief Norman Yakeleya.

Cheryl Casimer, proxy for ?aq'am Chief Joe Pierre and executive member of the First Nations Summit of British Columbia, expressed concern with the timelines set out by Bellegarde for input on the four policies.

“We have a lot of work to do in two months,” Bellegarde told delegates in his keynote address, pointing out that the Liberal government would be wrapping up the session in June with the federal election coming in October.

Casimer said that the resolution rejecting the Recognition and Implementation of Rights Framework was passed in December 2018.

“Once again we find ourselves at the eleventh hour. The government has presented us with a June deadline and we’re here weeks before that deadline and I don’t see anything being presented in terms of an alternative for us to consider in going forward or even to present to Joe Wild (Crown-Indigenous Relations assistant deputy minister) and Minister (Carolyn) Bennett,” said Casimer.

Bennett, accompanied by Wild, will be making a presentation at the forum on Thursday May 2.

Paulette Tremblay, CEO for the AFN, took the floor twice to address chiefs in the absence of Bellegarde.

She said that while the next annual general assembly wasn’t until July when resolutions could be made, the other decision-making body was the AFN executive committee and they would be meeting at the end of May.

“We can take some action prior to the end of June should we hear enough comments we need to do that,” said Tremblay.

However, her comments didn’t put everyone at ease.

“Now we’ve heard that the other option is to have the executive committee make decisions. I don’t know who the executive committee is and I would assume there’s got to be some recommendations that first come out of these committees that are operating that would come back to us before going to the executive. I mean, I think we’re trying to short circuit processes here and I have a great deal of difficulty with that,” said Association of Iroquois and Allied Indians Deputy Grand Chief Gord Peters.

Another chief expressed concern that in a meeting on Monday with Wild, the assistant deputy minister said he was involved in negotiating tables with 71 First Nations.

The fear, said the chief, is that Wild is going to claim his mandate to develop new policies by talking to a few First Nations in closed-door discussions. The chief also noted that Wild said his government wanted to repeal the inherent right policy by June.

“Their timeline doesn’t align with AFN’s. If we have directions from the chiefs, that won’t come in terms of a resolution until July. What we have to talk to Joe (Wild) about and get him to be accountable for that. What are the options?” asked Danny Sarazin, a senior analyst with the AFN’s lands, resource and territories committee.

“It seems like it’s a take it or leave it again. What we need to do is express that we cannot abide by those processes and reject it. Until again that overarching recognition and inherent rights, then we’re tinkering with the machine. But we look forward to seeing where those mandates are coming from on Joe Wild’s tables tomorrow.”