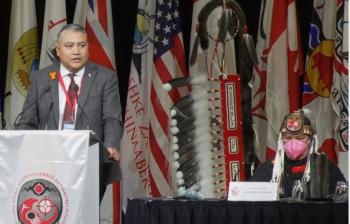 “...40-plus resolutions will be brought forward to the executive for approval and we’ll move from there.” — Terry Teegee, regional chief for the Assembly of First Nations British Columbia
By Shari Narine
Local Journalism Initiative Reporter
Windspeaker.com

Tight deadlines and lack of sufficient funding to develop a national action plan to implement the United Nations Declaration on the Rights of Indigenous Peoples should lead to an extension of the two-year timeframe set out in legislation, says Terry Teegee, regional chief for the Assembly of First Nations British Columbia.

“In the end with an action plan, there’s a lot of give and take between the two parties. If it requires more time, I don’t see why they wouldn’t want to give it more time. Unless they agree to everything we say, which is highly unlikely,” said Teegee, who holds the UNDRIP portfolio for the AFN.

However, when Justice Minister and Attorney General David Lametti gave his presentation to chiefs-in-assembly on the final day of the AFN’s annual general assembly July 7, it wasn’t to offer an extension.

“As you know, there was a legislative requirement put in the act to give it a two-year time frame to complete the action plan by 2023. So there’s a lot of work ahead of us over the next year,” said Lametti.

Teegee spoke to Windspeaker.com on July 12 to address the situation that faced chiefs last week when three resolutions concerning UNDRIP and the national action plan didn’t make it to the assembly floor because of lack of time.

In fact, Teegee himself didn’t make it to a special session to speak with chiefs about moving forward on UNDRIP scheduled for the day before the formal start of the AGA. Instead, Teegee, like all other regional chiefs, were meeting to discuss the future of National Chief RoseAnne Archibald, who had been purportedly suspended by the AFN executive committee on June 17 for allegedly breaching confidentiality in respect to a workplace bullying investigation against her.

Teegee says that missing that meeting with chiefs and not having the resolutions voted on by chiefs doesn’t mean chiefs’ concerns are not being addressed.

With only five of 48 resolutions dealt with during the three-day AGA, Teegee says the three UNDRIP and national action plan resolutions will be part of the “40-plus resolutions (that) will be brought forward to the executive for approval and we’ll move from there.”

Funding has been an issue, says Teegee.

The federal government’s first annual report on the progress of the implementation of UNDRIP, released this past June, indicates that 147 proposals of 208 applications were approved for funding.

This funding, Lametti told chiefs, is to “support you in developing your priorities for inclusion in the action plan.”

However, the AFN released figures indicating the federal government had received applications asking for more than $98 million.

Teegee says the AFN wants to see the federal government ante-up immediately with the UNDRIP funds promised in the 2022 budget. Those funds total $89 million over five years and are split into three categories: general UNDRIP implementation, the Justice department, and the National Defense department.

“If we want an action plan sooner than later that’s what we require, is more resources,” said Teegee.

Draft resolution 26 First Nations Priorities to Guide the Crown’s Implementation of the UN Declaration on the Rights of Indigenous Peoples called for the AFN “to establish an ad-hoc National Expert Panel on the United Nation Declaration on Indigenous Peoples Act National Action Plan to support research and analysis for First Nations interested in contributing to the National Action Plan creation and implementation over the next two years.”

Teegee says the AFN will lobby Prime Minister Justin Trudeau and other ministers to assure more resources are brought forward.

Teegee also points to the situation in British Columbia, the only province to have UNDRIP legislation.

“We wanted an action plan here in BC the first year, but it didn’t occur until the second year. I think we all have the aspiration to have a national action plan in the tight timeline but always know that things do happen, timelines can be extended,” he said.

Teegee also noted that he raised UNDRIP at the Council of Federation meeting with premiers on July 11 in Victoria. Also in attendance were leaders for the Métis National Council, Congress of Aboriginal Peoples, and the Native Women’s Association of Canada.