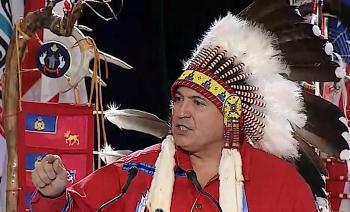 Scheduled to speak is Joe Wild, assistant deputy minister in the Crown-Indigenous Affairs department. Wild will be presenting the government’s perspective on the transformation of the four policies.
By Shari Narine
Windspeaker.com Contributor

Next week will see two intense days of meetings when approximately 300 chiefs and their proxies gather in Edmonton May 1 and May 2 to look at the updates required for Canada’s policies on additions to reserve, comprehensive land claims, specific claims, and treaty rights and inherent rights, title and jurisdiction.

“So let’s work together to fix them and update them in light of all the recent Supreme Court decisions that have been ruling in our favour as First Nations people.”

This forum is the follow-up to discussion held when Prime Minister Justin Trudeau addressed chiefs at the AFN’s assembly Jan. 14 and the brief question and answer period that followed. From that session, Bellegarde says, other issues were identified, including Bill C-91, the Indigenous Languages Act, and Bill C-92, which gives indigenous peoples control over their own children.

The 4 Policies and Nation Building Forum is only the beginning of the work that needs to happen, Bellegarde told Windspeaker.com. He will be delivering opening remarks on May 1.

“We’re not going to get anything completed in one-and-a-half or two days, but we’re starting to get input, we want dialogue, we want direction, we want feedback, we want ideas,” he said.

That work will be driven by the Chiefs Committee on Lands, Territories and Resources.

“We just want to bring people together, because there are many people and there is diversity amongst our people across Canada so we want to dialogue. We want a forum for dialogue and this is what this is,” said Bellegarde.

The agenda is, however, light on formal discussion, but heavy on presentations.

It’s paramount that those presentations are led by those impacted by the policies, said Bellegarde, and that is how the forum has been structured.

Also scheduled to speak is Joe Wild, assistant deputy minister in the Crown-Indigenous Affairs department. Wild will be presenting the government’s perspective on the transformation of the four policies.

Crown-Indigenous Affairs Minister Carolyn Bennett is expected to attend on the second day of the forum, but her time has not yet been confirmed.

Both Bennett and Wild recently came under fire from the AFN. In March, Bellegarde wrote a letter to Bennett, copied to Trudeau, condemning what the AFN viewed as an end-run by her department to implement processes associated with the Rights, Recognition and Implementation Framework legislation, which had been rejected by First Nations leaders.

In an internal AFN document in February, Wild was called-out for an “unacceptable” proposed planning committee which slotted AFN into a “predetermined” administrative role for framework legislative changes.

Bellegarde stresses that the work on the policies will be substantial and will not be done before the federal election.

“We’re not going to resolve these, update these four policies within two months. It’s too rushed, too fast, too quick. It’s all about developing capacity and moving beyond the Indian Act, but it’s only the rights and title holders that will determine that path and the time frame to do that. So it’s important that we bring people together,” he said.

Information from this forum will be brought forward to the Chiefs in Assembly in July. As well, the regional chiefs and portfolio holders will take guidance from the priorities set at the forum and develop work plans to move forward.