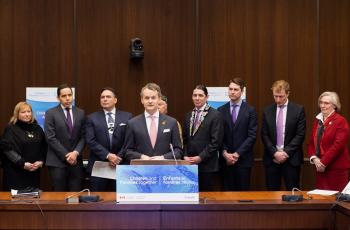 “If this proposed legislation affirms First Nations jurisdiction, respects diversity among First Nations, protects the safety and wellbeing of First Nations children and families, and embeds a statutory funding base, then it has a foundation for success. If it is deficient on one or more of these fronts or tries to kick these foundational items into a forum for future discussion, then we must press for a better deal.” —Cindy Blackstock, executive director for the Caring Society in 2019 First Peoples Child and Family Review paper
By Shari Narine
Windspeaker.com Contributor

“I hope there is a woman who is in labour in Winnipeg, who is watching this today and who is having people challenge whether she is good enough, whether she is good enough to be a mom, and there may even be some indication on her chart that puts that in doubt. And I hope that anybody that has to do with the care of that mother thinks twice about what the best thing is to do for that child. Because the best thing for that child is to be raised with their family, raised in their culture, surrounded by their land and their lineage and their loved ones,” said Jane Philpott.

The former Indigenous Services Canada minister seemed to be speaking from her heart on Feb. 28 as she joined national Indigenous leaders and new Indigenous Services Minister Seamus O’Regan in the introduction of Bill C-92, which is to pass control of family and child welfare matters to First Nations, Inuit and Metis.

In Manitoba, the numbers are staggering. Ninety per cent of children in care are Indigenous, said Settee. It’s important that First Nations control how their children are dealt with, he said and points out that MKO is among a number of Indigenous organizations presently meeting with the province and working towards this end.

The bill, which received first reading in Parliament Feb. 28, affirms the rights of Indigenous people to deliver child and family services and sets the “best interests” of the child as paramount.

What the bill doesn’t do is provide funding to go along with the authority given to Indigenous governing bodies.

That is a concern for Settee.

The lack of “binding funding” is also a concern for Ontario Regional Chief RoseAnne Archibald.

“If there is no funding tied to the legislation, then we risk not being able to exercise our jurisdiction, resulting in a missed opportunity. Generations of our children have grown up under discriminatory federal funding as shown by the Canadian Human Rights Tribunal (CHRT). We need the funding obligation in order to ensure that First Nations children and families within Ontario receive the services they need to thrive,” said Archibald.

Archibald is joined by the Association of Iroquois and Allied Indians calling for an amendment to the bill to include funding.

Andrea Auger, reconciliation and research manager for the First Nations Child & Family Caring Society of Canada, also draws the comparison with the CHRT.

“The funding piece is a big thing,” said Auger. “There’s a mention of funding (in the bill), but I think it’s really problematic because it’s exactly what we’ve seen with CHRT, this case-by-case approach.”

Funding for child and family services is a battle the Caring Society has been waging for years with the federal government in the form of Jordan’s Principle. To get funding through Jordan’s Principle, First Nations agencies have to negotiate funding formulas with the government. The CHRT, says Auger, found this approach led to discrimination, with First Nations children receiving less funding than their non-First Nations counterparts for the same services.

Auger is also concerned about what she calls the “pan-Indigenous approach.” She points out that First Nations, Metis and Inuit all have different histories in child welfare with different structures, legislation and funding. First Nations are more established, with more expertise and experience as they operate more than 100 child and family service agencies.

“We need to have some sort of provision for First Nations specifically to recognize that we have the Indian Act, recognize the CHRT ruling that applies to First Nations kids. I think those things are really important in terms of the legislation,” said Auger.

The timeline for which the bill needs to receive Royal Assent is tight. With a federal election to be held in October, the bill only has four months to pass two more readings in the House of Commons and to get Senate approval.

“It has a very precarious journey,” said Assembly of First Nations National Chief Perry Bellegarde, who said everyone needed to work collaboratively and cooperatively for the bill to pass.

Natan Obed, president of the Inuit Tapiriit Kanatami, said work needed to be done in order to ensure this was the “best possible act it can be upon Royal Assent.”

“We have a lot of work ahead of us … It seems to me, without question, that Parliament will pass this legislation and it will get Royal Assent because I can’t see any member of Parliament or any Senator that doesn’t agree with what’s in the bill,” said Clement Chartier, president of the Metis National Council.

However, the Caring Society does not see the same urgency for passing the bill before the next election. Auger points out that First Nations are already doing good work and many already have jurisdiction over their child welfare systems.

“I don’t think it’s something that should be rushed. It should be given due consideration given that it’s going to affect so many children in the country,” said Auger. “It’s a really short time line for this really important piece of legislation to go forward.”

Auger points out that Cindy Blackstock, executive director for the Caring Society, didn’t become involved with the draft legislation until December.

“She’s the top First Nations’ child welfare expert in the country and they only asked us in December to (be part of) a legislation working group,” said Auger.

From June to October in 2018, the government held 65 engagement sessions with national and regional Indigenous organizations; experts and Indigenous child welfare advocates; women’s organizations; Indigenous youth, Elders and grandmothers; and provinces and territories.

Auger isn’t confident what was heard over that time period was reflected in the legislation. She also doesn’t believe that the departments of Indigenous Services and Justice had the expertise in child welfare to draft the legislation.

In a paper published in the 2019 First Peoples Child and Family Review, Blackstock writes, “If this proposed legislation affirms First Nations jurisdiction, respects diversity among First Nations, protects the safety and wellbeing of First Nations children and families, and embeds a statutory funding base, then it has a foundation for success. If it is deficient on one or more of these fronts or tries to kick these foundational items into a forum for future discussion, then we must press for a better deal.”